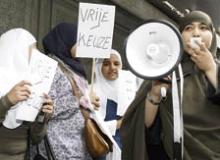 Dozens of protesters sported party hats, colanders and other unlikely headgear in protests Tuesday at schools in the Belgian city of Antwerp where authorities have banned girls from wearing the Muslim veil.

Around 60 people turned up for the start of the school year outside the gates of the Athenee Royal of Antwerp school, where most students are Muslims, carrying banners calling for “freedom of choice,” television pictures showed.

Another 70 protesters assembled at the Hoboken secondary school in suburb of Antwerp, in the Dutch-speaking north of Belgium which also introduced a ban on Muslim veils on Tuesday.

The two schools targeted for the protests were following the lead of others throughout the country as the number of schools still allowing the veil decreases each year.

“This ban is against the freedom of religion and violates the right to an education,” for young Muslims, said Samira Azabar, one of the protest organisers.

After the two schools decided on the ban in June an imam in Antwerp called on “all Muslim parents not to send their children back to school” for the new academic year.

Athenee head mistress Karin Heremans said that so far a dozen students had stayed away from school.

She justified the ban by saying girls who had refused to wear the Muslim veil had been subjected to intimidation at a school where “the proportion of Muslims has increased from 50 percent to 80 percent in the last three years.”