In a testy ten-minute exchange on “Real Time” with television host Bill Maher and author Sam Harris, Hollywood actor Ben Affleck slammed the host for commenting that Islam is the only religion that acts like the “mafia.” Along with journalist Nicholas Kristof, Affleck argued that ascribing an entire religion based on the actions of the terrorist group Islamic State, was “gross” and “racist,” while Maher and Harris shot back that criticizing Islam “gets conflated with bigotry towards Muslims as people,” a ploy that others have used to build on anti-Muslim sentiment in the country.

During the exchange with Kristof and RNC Chairman Michael Steele, Affleck took the lead to slam Maher and Harris for defending their generalization of Islam. Harris stated, “We have been sold this meme of Islamophobia, where every criticism of the doctrine of Islam gets conflated with bigotry towards Muslims as people.” Affleck asked, “Are you the person who understands the officially codified doctrine of Islam?”

To Maher’s idea of generalizing Islam, Affleck said, “It’s gross, it’s racist,” while Kristof added that the view of Muslims is “incomplete,” referring to the example of Malala Yousafzai, a teenager shot by fundamentalists, who is part of the larger peaceful Muslim movement. Harris panned both Affleck and Kristof’s responses saying that Islam is “the motherload of bad ideas” and that fundamentalists are not just the “fringe group” of practicing Muslims.

Still later in the exchange, Maher said, “It’s the only religion that acts like the mafia that will [expletive] kill you if you say the wrong thing, paint the wrong picture or write the wrong book” to which Affleck shot back, “What is your solution? To condemn Islam? To do what? We’ve killed more Muslims than they’ve killed us by an awful lot.”

Last week, Maher came under fire for saying that the “vast numbers of Muslims want humans to die for holding a different idea,” stating that they have “too much in common with ISIS.” He also said that self-identified liberals should “stand up for liberal principles,” saying that they are silent on atrocities committed by Islamic fundamentalists. 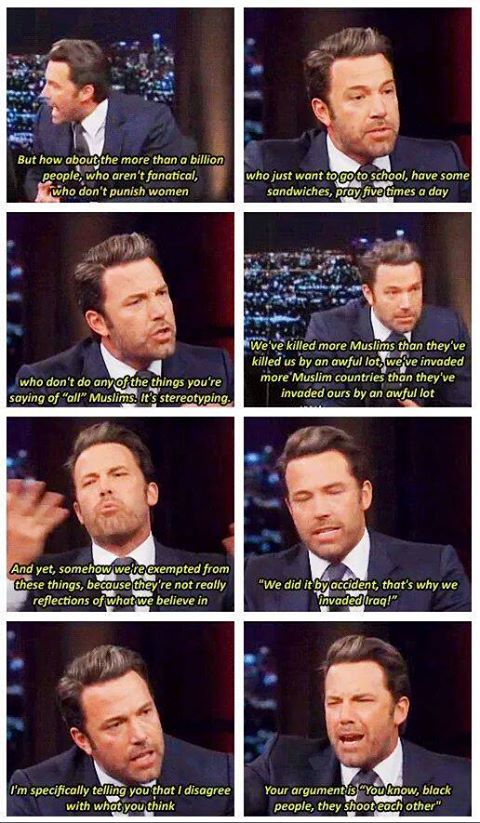