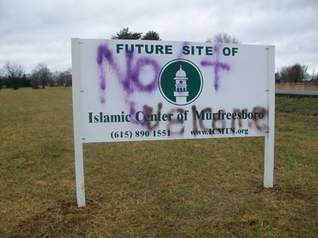 MURFREESBORO — With an April 25 court hearing drawing near in the fight over mosque construction here, foes of the Islamic Center of Murfreesboro’s plans are taking the battle regional.

But while the court issue next month will focus on whether Rutherford County provided ample public notice for the 2010 meeting in which county planners approved the mosque site plan, opponents remain focused on a religious conflict, sounding a warning about the perceived spread of Islam and the damage they believe it will do to American society.

“This is not a Muslim-bashing deal. I don’t have any problem with Muslims. It’s Islam that’s causing it,” Kingdom Ministries pastor Darrel Whaley told a crowd of about 70 people last Tuesday at the Cannon County Senior Citizen Center.

Whaley warned the group that Woodbury and Cannon County are part of the area the Islamic Center of Murfreesboro plans to cover, based on a 2010 posting on the ICM’s website. It’s one of several counties surrounding Rutherford where Whaley said he hopes to deliver the message.

The minister told the crowd he was glad some Muslims felt free enough to attend the event and noted that when he preaches each Sunday at his Walter Hill church, not everyone is going to agree. “They’ve got that right,” he said.

Yet when the former president of the ICM tried to address the crowd to refute “misconceptions” later in the event following presentations by attorneys Joe Brandon and Tom Smith, Whaley refused to let him speak.

“I came here to say open our hearts to each other,” Ahmed Elsayed said, turning to the audience and pleading for the opportunity to speak. “We want to have mutual respect.”

One man in the audience argued that he had served in the military to help maintain the right to free speech and that Elsayed should be allowed to speak.

Whaley’s presentation in Woodbury Tuesday quickly shifted into a Sunday sermon, in which he told the audience, “There are no other gods with the offer of heaven. It is his will that everyone be saved. God so loved the world that he gave his son – for Muslims … for atheists. To deny his truth is to be willfully ignorant or intellectually dishonest.”

But moments after saying, “God loves Muslims just as much as anyone in the room,” the minister outlined a seven-step plan by Islam to dominate the world, starting with the 9/11 attack, followed by the destabilization of secular Muslim governments, the toppling of moderate Muslim regimes, a pending confrontation with the West and a declaration of total domination by 2020. “Their goal is to turn our nation into an Islamic republic,” he said.