Young Muslims today defended the flying of a black flag above the gates of an east London council estate. Youths at the gates to the Will Crooks estate, in Poplar, branded objectors to the flag – which has been adopted by some jihadist groups – as “racist”.

The flag was removed yesterday for the second time following two visits from Met officers in as many days. It was hung there alongside the Palestinian flag as part of an “end the siege in Gaza” protest.

Today one youth outside the estate said: “It’s just racists complaining. If it was the St George’s flag, it would be alright. But this is our version and there’s this big reaction.” Another added: “I don’t understand why it has caused so much reaction. All it is is a declaration of the belief in Allah. It’s not the ISIS flag.”

The first flag was taken down by local nun, Sister Christine Frost, 77, on Friday, after she suspected it had been hoisted there by “naive young hot heads.” However, it reappeared before local community leaders decided to remove it yesterday afternoon after police visited the estate in Poplar High Street.

A Met spokesman said they first attended on Friday but the flag had been removed when they arrived.

They added: “Police were made aware of a flag displayed at the Will Crooks Estate again on Sunday, August 10. Officers attended the venue, spoke to residents and met local community leaders who removed the flag voluntarily. It was not an ISIS flag. There are no criminal offences arising from this incident.”

Perhaps the Standard and other newspapers should have thought twice before publishing reports suggesting that ISIS enjoyed support in Tower Hamlets.

Sister Christine Frost refuted that suggestion herself. She told the East London Advertiser that she asked the youths who had put up the flag to remove it: “So they took it down. They had no idea of the implications of the black flag being taken over by Isis fighting in Iraq….”

The Advertiser report states that the flag “bore similar writing to the jihadi flags flown by Islamic extremists”. As the youth who spoke to the Standard pointed out, the writing is in fact the shahada, the Islamic creed, which states “There is no god but God; Muhammad is the messenger of God”.

The flag has, though, been used by extremist groups, and it was inappropriate to raise it over a housing estate. It obviously wasn’t just racists who objected to this. However, that doesn’t excuse irresponsible media reports trying to link Tower Hamlets to ISIS.

While we’re on the subject, it’s worth pointing out that an earlier display of the black flag during a Gaza protest in the Blackwall tunnel similarly served as a pretext for a disgraceful attempt to associate Tower Hamlets with terrorism … by one of the borough’s own MPs. Here is how Jim Fitzpatrick, who represents the Poplar and Limehouse constituency, responded to a report of the protest on the Metro website: 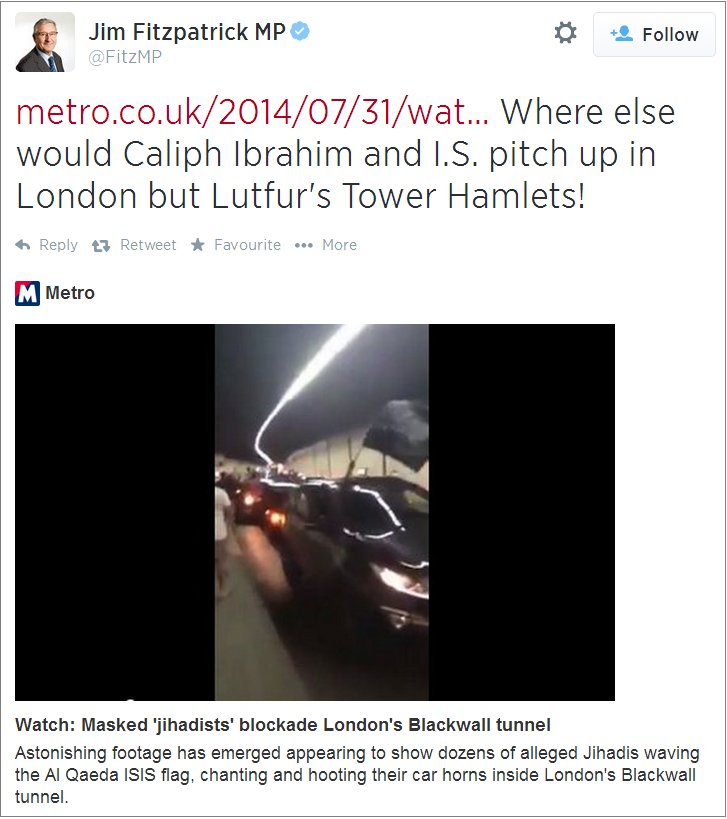 Last year Harry Phibbs wrote a piece for ConservativeHome in which he listed Fitzpatrick as one of a dozen Labour politicians who would be welcome to defect to the Tory party. As a Labour Party member, I have to say I fully endorse that proposal. Perhaps we could swap Fitzpatrick for Sayeeda Warsi?