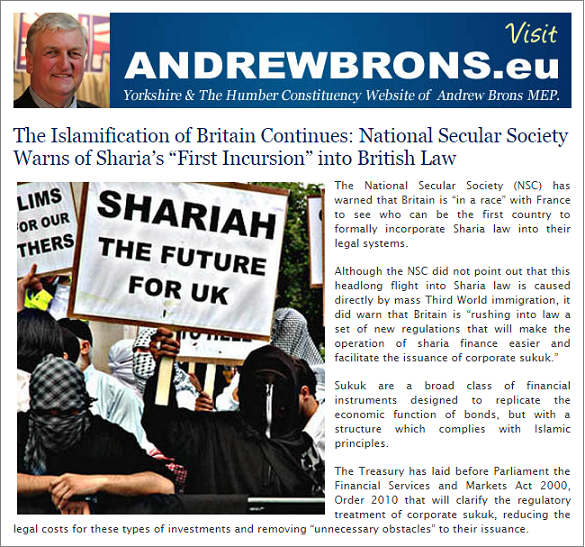 The National Secular Society (NSC) has warned that Britain is “in a race” with France to see who can be the first country to formally incorporate Sharia law into their legal systems.

Although the NSC [sic] did not point out that this headlong flight into Sharia law is caused directly by mass Third World immigration, it did warn that Britain is “rushing into law a set of new regulations that will make the operation of sharia finance easier and facilitate the issuance of corporate sukuk.”

Sukuk are a broad class of financial instruments designed to replicate the economic function of bonds, but with a structure which complies with Islamic principles. The Treasury has laid before Parliament the Financial Services and Markets Act 2000, Order 2010 that will clarify the regulatory treatment of corporate sukuk, reducing the legal costs for these types of investments and removing “unnecessary obstacles” to their issuance.

The British National Party is the only political party which has consistently pointed out that if a people are replaced though mass immigration, then the culture which those people created will also be replaced. The spread of Sharia law into the financial sector is only the beginning of this process. Left unchecked, Muslim numbers will soon reach the position where they will be able to demand – and get – full Sharia law implemented in Britain.