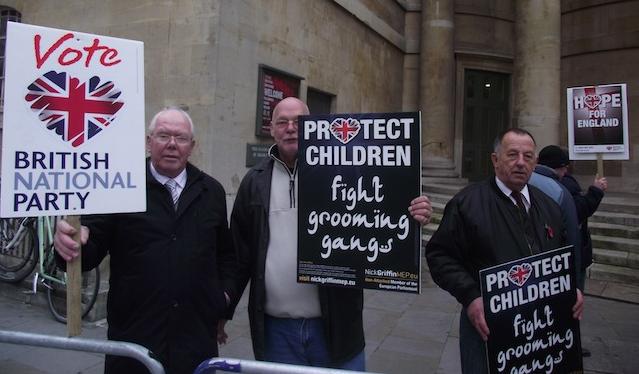 VICE: What’s brought you out here today?
It’s my duty as a nationalist, mate. The BBC have got a pretty entrenched problem here. The whole BBC is a big cover up at the moment.

What’s nationalism got to do with being against paedophilia?
We’ve got to stand up against these grooming gangs. There’s a problem with the Islamic people targeting Christian children and not their own. Alright, you’ve got British paedophiles – I can’t deny that – but you haven’t got nine or ten British people in a gang doing it.

What? There are far more examples of white paedophile gangs in Britain than Muslim ones.
There’s no evidence of that.

I’m pretty sure that there is.
You know what? Leave me alone. All you journos are the bloody same.

VICE: What are your thoughts around all this?
Paedophilia is part of Muslim culture. They all vote Labour. The Labour Party is Marxist and they’re involved with this Marxist mob here.

Wait, the BBC is Marxist?
It’s full of them. It’s been riddled with Marxists since its inception.

Really? One of the first things the BBC did was help break the General Strike in 1926.
And?

Do you think the BBC’s Marxism manifests itself in its programming?
Well, just look what happened when they let Nick Griffin onQuestion Time if you want an answer to that. They selected the audience – full of Marxists. And the panel was absolutely full of them.

Baroness Warsi is a Marxist?
No, she’s a Muslim. Her father is an immigrant. He’s got nothing to offer this country. It’s take, take, take.

That’s funny, because I read he started a successful company that employs a bunch of British people. It’s funny what you can choose to ignore.