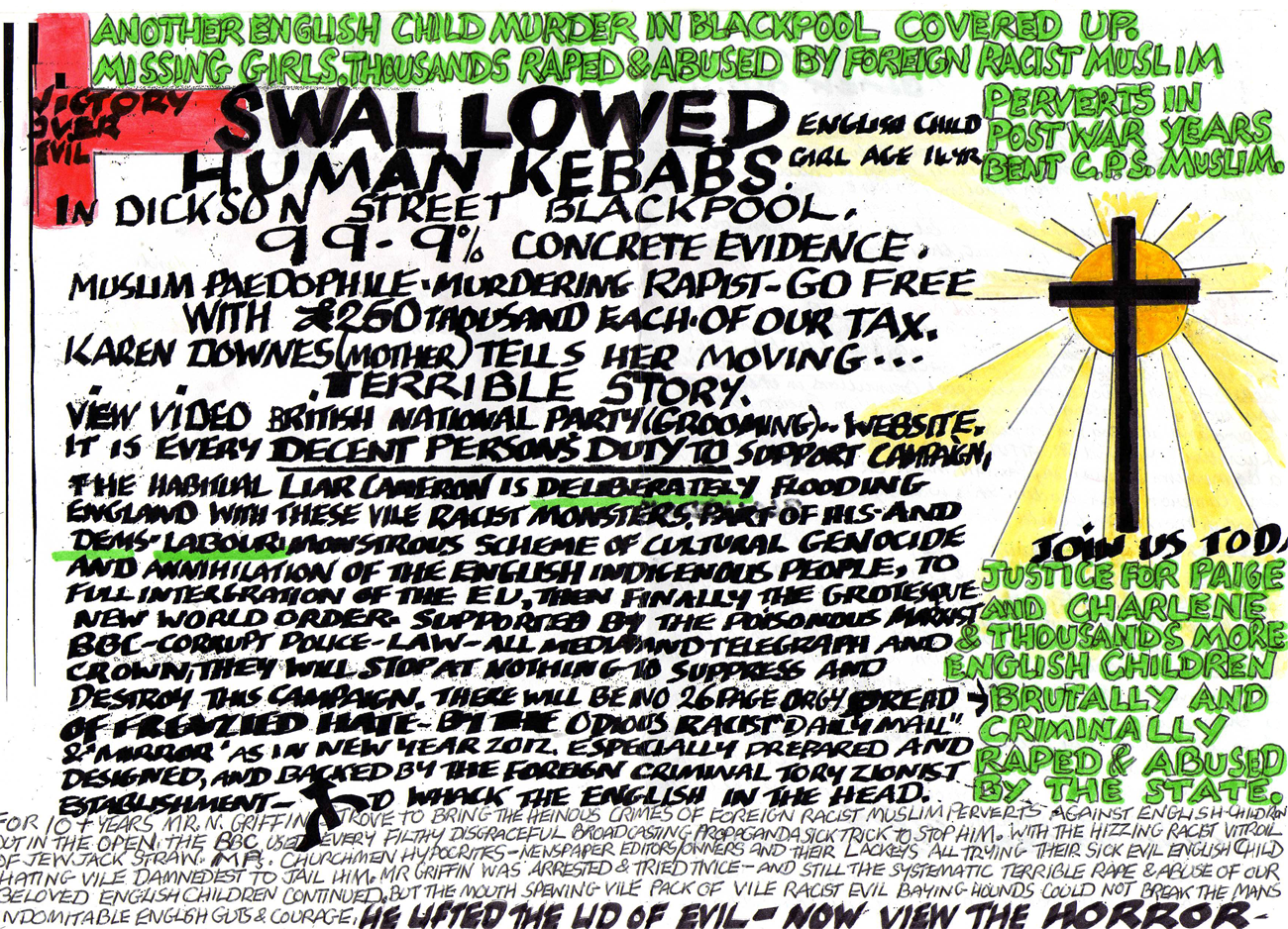 The British National Party has found a new heroine in the battle to defend free speech. Her name is Margaret Walker, and she was up in front of Fareham magistrates last week following complaints about a homemade leaflet she had circulated based on the cases of missing Blackpool teenagers Charlene Downes and Paige Chivers (who the far right claim were murdered by Muslims). Walker was given an interim ASBO preventing her from distributing any further copies of her leaflet before she returns to court on 20 July.

Despite the fact that she is clearly a crank of questionable mental stability (as can be seen from her leaflet here and here), the BNP organised a demonstration in solidarity with Walker outside Fareham Magistrates Court on Friday. Evidently it wasn’t very well attended. A BNP report carrying the rather plaintive headline “Were you in Fareham today?” stated that that Charlene’s mother, BNP supporter Karen Downes, came all the way from Blackpool for the protest “but many locals couldn’t be troubled”. However, the case does shed some light on current developments in the BNP.

Walker’s leaflet is in the main a typical far-right rant against “Muslim Foreign Perverts, raping and abusing our English children”. It features Breivik-style claims that “the habitual liar Cameron is deliberately flooding England with these vile racist monsters” and that the Tories, Lib Dems and Labour are all pursuing a “monstrous scheme of cultural genocide and annihilation of the English indigenous people” through mass Muslim immigration.

But Walker’s denunciations of “Jew Jack Straw” and “the foreign criminal Tory Zionist Establishment” (shades of ZOG) hark back to the rhetoric of the old Tyndall-led BNP. Part of the “modernisation” strategy adopted by Nick Griffin when he deposed John Tyndall as BNP chairman in 1999 was to ditch the open promotion of antisemitism on the grounds that this was an obstacle to attracting wider political support. Only three years ago Griffin told the Tel Aviv newspaper Ma’ariv that he “had no time for anti-semites”. He even tried to present the BNP as an ally of the Jewish community on the basis of a supposed common antagonism towards Muslims. In 2006 a BNP spokesperson wrote a letter to the Jewish Chronicle that concluded with the following appeal: “We hope that our future behaviour may in time bring you to understand that our repudiation of antisemitism is genuine. We are the only party in Britain that is truly serious about fighting the Islamofascist threat.”

So until recently Griffin would have steered well clear of defending a BNP member who publicly expressed the sort of antisemitic views contained in Walker’s leaflet. This new development reinforces the argument that Griffin – who has a long history of executing sharp political reversals – has concluded that there is no realistic prospect of the BNP making any electoral gains in the near future and consequently he has now junked his old tactic of hiding the party’s core ideology in order to win popular support. Instead he has turned towards building a narrower organisation that will attract recruits by presenting a more overtly fascist profile.

From that standpoint, the main source of new members for the BNP is to be found among existing far-right sympathisers. Griffin has therefore adopted an approach of working with the sort of extremist groupings he would have avoided in the days when he was still trying to cultivate what he termed an “image of moderate reasonableness”. The BNP recently campaigned outside Liverpool Crown Court over the Rochdale “grooming” case together with the National Front, North West Infidels, Combined Ex Forces and English Defence League, and Griffin was happy to pose for a photograph alongside two neo-Nazis clutching a flag featuring the Odin’s Cross. Friday’s Fareham demo involved NF and EDL as well as BNP members, and the BNP report appealed for a “united front” of the far right in order to exploit the Charlene Downes case.

A further corollary of the thesis that the electoral road is blocked to the BNP for the time being is that a turn to direct action is the way to build the party. Speaking at a dinner before the BNP annual conference 18 months ago Griffin promised a policy of “increased militancy” against Islam. Admittedly, little has been seen of this policy so far, but that is because a collapse in party membership has meant the BNP lacks the forces on the ground to implement it. If Griffin succeeds in winning a significant number of new recruits from the fascist diaspora, however, a rise in attacks on Muslims – and also on the labour movement and the left – can be anticipated.