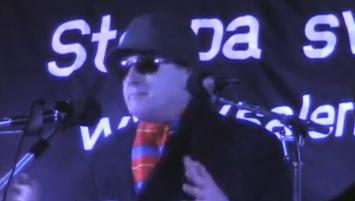 Nick Griffin’s website carries a report from Preston BNP member Tony Bamber who, the introduction states, was “asked by Nick Griffin MEP to represent him and the British National Party at one of Europe’s largest protests against multiculturalism which was held in Salem a suburb of the Swedish capital Stockholm”.

Bamber, you may recall, achieved notoriety through his distribution of a leaflet claiming that Muslims are responsible for the heroin trade. He was charged with incitement to religious hatred but subsequently acquitted – thereby demonstrating the utter uselessness of the religious hatred law in its present form.

The event in Sweden that Bamber attended on behalf of Griffin and the BNP was the Salem March, an annual parade organised by Swedish fascists to commemorate the death of Daniel Wretström, a neo-Nazi skinhead who was a member of the white power band Vit Legion (White Legion). Since being killed in December 2000 during an altercation with a group of youth that included Swedes of migrant origin, Wretström has become a martyred hero for the far right, who blame his death on immigration and multiculturalism, acclaiming him as “the Horst Wessel of our generation”.

It is an indication of the extremism of the political forces behind the Salem March that even the far-right Sweden Democrats refuse to participate, presumably reasoning that association with such an event would undermine their strategy of hiding the party’s fascist origins and cultivating the image of a more mainstream populist party.

This, of course, is the same strategy the BNP itself has been pursuing since Griffin took over the leadership from John Tyndall back in 1999. So you might have thought that the BNP too would be keen to distance themselves from the politics behind the Salem March.

Yet, in his speech at the rally that concluded the march, Bamber declared the BNP’s solidarity with the Swedish organisers of this celebration of the life of a neo-Nazi white supremacist, congratulating them on adopting “the sort of methods that I and the British National Party entirely approve of and are trying really hard to recreate in my country”.

Under Griffin’s leadership the BNP’s political practice may have been dominated by the “quest for legitimacy”, but this is only the most recent phase in Griffin’s ideological development, which has been characterised by a series twists and turns including some abrupt reversals of policy. As critics noted after he took over as leader of the BNP: “He has been a conservative, a revolutionary nationalist, a radical National Socialist, a Third Positionist, a friend of the ‘boot boys’ and the skinhead scene, a man committed to respectable politics and electioneering, a ‘moderniser’. Which is he in reality?”

Taken in association with his recent promise of increased militancy by the BNP, including physical confrontation with its opponents on the streets, the BNP’s official involvement in the Salem March would seem to reinforce the view that Griffin may be about to execute another shift in policy – away from “suits not boots” and back towards more traditional fascist methods.