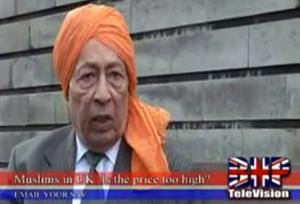 An elderly Sikh who describes Islam as a “beast” and once provided a character reference for Nick Griffin during his racial hatred trial is set to become the British National Party’s first non-white member.

Rajinder Singh has been sympathetic towards Britain’s far-right party for much of the past decade even though he currently remains barred from becoming a member because of the colour of his skin.

But last weekend the BNP’s leadership took their first steps towards dropping its membership ban on non-whites after the Human Rights Commission threatened the party with legal action. The move will be put to a vote of members soon.

Martin Wingfield, the BNP’s communications and campaigns officer, has already put forward the case for Mr Singh’s membership, telling members on its website: “I say adapt and survive and give the brave and loyal Rajinder Singh the honour of becoming the first ethnic minority member of the BNP.”

A BNP spokesman said last night: “He is perhaps the kind of immigrant you want if you are going to have them.” Mr Singh, a former teacher from Wellingborough, Northamptonshire, says he would be “honoured” to become a card-carrying member of the BNP.

Mr Singh and another Sikh from Slough who goes by the pseudonym Ammo Singh have previously co-operated with the BNP and have been used by the party’s leadership to try to woo Asian supporters, particularly Hindus and Sikhs living in areas where tensions with Muslims run high. The party has had little success, however, with all mainstream Sikh and Hindu groups widely condemning the BNP.

But Rajinder Singh and Ammo Singh – who keeps his identity secret but is thought to be an accountant in his late thirties – have answered Mr Griffin’s call, thanks to the BNP’s staunchly anti-Islamic rhetoric since September 11.

Mainstream Sikh groups said they were appalled. Dr Indarjit Singh, director of the Network of Sikh Organisations, said: “Sikhism stresses equality for all human beings. Therefore Sikhs who are true to their faith, will having nothing whatsoever to do with any party that favours any one section of the community.”

The view that Nick Griffin’s promotion of Rajinder Singh and Ammo Singh was an attempt to “woo Asian supporters” is rather one-sided.

It is true that Griffin began making a pitch for support among Sikhs (and Hindus) on an anti-Muslim basis years ago. But this was not because he wanted to win large numbers of Asian supporters to the BNP. Rather, he aimed at attracting a few extreme right-wingers from the Sikh and Hindu communities because he thought this would help the BNP deflect accusations that it is a fascist organisation and that its campaign against Muslims is racist.

But the problem he faced was that Sikhs and Hindus were excluded from joining the party, because membership was restricted to white people. As the Independent article notes, even Rajinder Singh hasn’t been allowed to join the party, despite the fact that he has written for the BNP press, spoken at their meetings and appeared on their election broadcasts.

Griffin first tried to change the BNP’s rulebook to admit non-whites back in 2002, and again in 2004, but he got nowhere. The BNP’s fascist core cadre who have gone along with other aspects of Griffin’s “modernisation” strategy couldn’t be persuaded to swallow that.

Now, as a result of court action by the Equality and Human Rights Commission – together with the provisions in the Equality Bill, which will ban political parties from racially discriminating over who they accept as members – Griffin will finally get his way and the BNP will amend its constitution to admit non-white members. And then no doubt a handful of extremist Sikhs and Hindus will indeed join the party.

Griffin will make a big thing about this, just as he has over the fact that the BNP has a councillor of Jewish origin, in order to assert that the party has put its racist and fascist past behind it – all in the interests of more effectively pursuing its campaign against “mass Third World immigration” and “Muslim colonisers”.