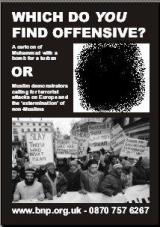 The British National Party is seeking to exploit controversies involving Muslims in its campaign for local authority elections in May.

The extreme right-wing party, which hopes to field 1,000 candidates in England, will include in its campaign material one of the cartoons which sparked outrage among Muslims across the world, showing the Prophet Mohamed with a bomb in his turban.

One leaflet asks voters: “Are you concerned about the growth of Islam in Britain? Make Thursday 4 May Referendum Day.” It adds: “We owe it to our children to defend our Christian culture.”

Labour MPs condemned the BNP’s attack on Muslims while also urging their party’s leaders to take more seriously the threat from the BNP in its working-class heartlands.

Mainstream parties say the BNP’s campaigning has become more sophisticated. The party is using telephone canvassing for the first time and playing down its hostility to blacks and Asians in order to focus on Muslims. Other campaign literature contrasts the jailing of the Muslim cleric Abu Hamza for inciting murder and racial hatred with the partial acquittal of Nick Griffin, the BNP leader, who faces a retrial on unresolved racial hatred charges on 15 May.

The BNP, which now has 19 councillors, is expected to focus efforts in areas where it has performed strongly in the past such as parts of Lancashire, Yorkshire, the West Midlands and east London, where it won 35 per cent of the vote in recent by-elections in Barking. Its share of the vote rose from 1 per cent at the 1992 general election to 4.2 per cent last year.

Labour MPs are worried that the BNP could capture more council seats by exploiting the disenchantment with the Government among traditional Labour supporters and stoking fears about the Muslim community. The MPs fear that Tony Blair’s determination to retain the support of Middle England could leave Labour vulnerable to a BNP advance in working-class areas.

Jon Cruddas, the Labour MP for Dagenham, said: “The BNP’s pitch is to be more Labour than New Labour with a virulently anti-Muslim agenda.” He said Labour’s strategy of targeting swing voters in marginal seats was “diametrically at odds” with the need to reassure traditional supporters about the Government’s record.