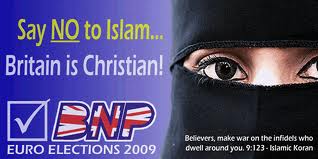 Far-right politicians in Stoke-on-Trent are campaigning for halal meat to be taken off school menus.

Seventeen of the 93 city schools are offering the ritually-slaughtered meat in their canteens after at least 10 per cent of parents backed the move. But the British National Party (BNP) is calling on Stoke-on-Trent City Council to ban the halal meat on animal welfare grounds.

BNP group leader Councillor Michael Coleman today denied the campaign is an attack on Muslims. Instead he urged councillors to stop the “barbaric method of slaughter”.

“The council tries to make out that it is just an option, but I don’t believe that is the case in all these schools. I think it is just being served up and pupils are not even aware that they are eating it. It’s against the law for me to kill an animal in that way, but it’s fine for a Muslim or a Jew to do it. It’s an unacceptable state of affairs.”

Halal meat has been provided to some city schools since 2000. It is estimated that halal meat accounts for about four per cent of the meat served in the 17 schools. All the schools offer an alternative to halal meat, except St Mark’s Primary.

Shelton Islamic Centre director Rana Tufail, said: “I am not aware of any problems caused by serving halal meat in schools in the last 10 years.” Community Voice Councillor Peter Kent-Baguley accused the BNP of “making mischief” against Muslims. He said: “The BNP are fiddling while our services burn, and are patently seeking to make trouble.”

Parents today hit out at the BNP motion which goes before the council on December 9. Sarah Richardson, whose nine-year-old son, Jordan, attends St Mark’s Primary, said: “I don’t see what the fuss is about. Jordan loves the food at school.” Jordan, of Whitmore Street, Hanley, said: “I really like the halal burgers, but my favourite school dinner is curry.”

No doubt the BNP hopes this campaign will restore their political fortunes in Stoke-on-Trent, where election defeats and defections have reduced them to five councillors from a high point of nine, while in this year’s general election BNP candidate Simon Darby received a derisory 7.7% of the vote in Stoke-on-Trent Central, a seat the BNP thought it had a good chance of winning.