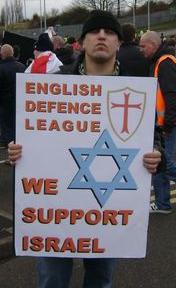 Members of far-right organisations are urging colleagues to support an unlikely ally – Israel. Small groups of BNP and English Defence League supporters are championing the Jewish state as part of a perceived struggle with the Muslim world. They call for Israel and the BNP to be “comrades in arms”.

One person commenting on a pro-BNP blog suggested that the party should open an office in Israel to “show solidarity with the Israeli people”. But Jon Benjamin, Board of Deputies chief executive, warned: “No one in their right mind should have any truck with the BNP or their ilk.”

A blogger on The Green Arrow, an independent website which supports the BNP, encouraged others to look to Israel to avoid the West’s “meek surrender to Islam”.

Under the name Reconquista, the blogger wrote: “Against the backdrop of an enormous anti-Israel propaganda campaign waged by Muslims and by the Marxist left, Israel continues to fight for its very survival.

“I believe it is absolutely imperative for British Nationalists to be fully aware of the lies, deceptions, hypocrisy and moral cowardice surrounding Israel and the Jewish people.”

One person commented on the blog: “I have written several times calling for committees for the mutual defence of white and Jewish communities to be set up here. Both people are under attack… Jewish people need to stop opposing us as their enemy.”

Another adds: “We need Israel. We must join with them to fight this terrible wave of Islam trying to take over the world. The Jews know all about ethnic cleansing, and they will never allow themselves to be in that position again.”

In May, the extreme right-wing anti-Islamic fundamentalism group the English Defence League launched a “Jewish division”, encouraging Jews to “lead the counter-Jihad fight in England”.

Mr Benjamin said: “Short-term political expediency and pronouncements of this kind are merely a cynical ploy by the BNP to try to re-invent themselves to capture the support of those who should know better.”

A CST spokesman said: “There may be the odd BNP activist who thinks that antisemitism is stupid, and there may well be others who think that supporting Israel is a good idea, but none of it changes what the BNP is all about.”

This article includes a revealing interview with Roberta Moore of the EDL’s “Jewish Division”. She doesn’t bother upholding the official line that the EDL are just against “Islamic extremists”. She tells Haaretz: “We are anti-Islam, as everyone should be. Islam is not a religion, but a cult. It has all the features of a cult, like the religions of Jim Jones and David Koresh. It’s exactly the same. But people don’t understand that.”

Alan Lake, the businessman who has bankrolled the EDL, adds: “Wherever Islam is the dominant culture, tolerance is infringed and non-Muslims are harmed. In the past 1,400 years, Islam has eradicated every culture, wherever it has taken over. The same process is ongoing today…. I don’t say that Islam should be annihilated, just as I say that we should not eradicate tigers, but I don’t want tigers sitting here next to me when I eat my dinner. They’re fine in the jungles of Bengal, but not here.”