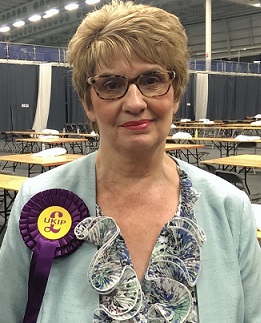 A councillor has hit out at Bolton UKIP after it claimed single-sex faith schools were “socially divisive”.

UKIP issued a statement after Tauheedul Free Schools Trust was given the go-ahead to build a £10 million Muslim boys school, named Eden Boys, at the site of the former Wolfenden School in Astley Bridge. UKIP singled out the school as an example of where single gender faith schools could harm community relations.

Joan Johnson, chairman of the Bolton branch, said: “It seems that, with the government’s free school programme, more and more single gender faith schools are being approved in Bolton. This would seem to be a retrograde step. UKIP is not anti-Islamic but we will encourage and promote social integration and will not subscribe to anything that is socially divisive.”

But he added that UKIP was wrong for trying to score political points by challenging faith-based education. He said: “The ideal is to have all classes with both genders, all the faiths taught in community schools. However, in Britain there has been a long tradition of diversity, and in Bolton we have three Catholic schools and two Anglican.

“The local authority is committed to working with all schools to ensure that all Bolton children have the advantage of a balanced education, and we have no fears that this will be different with the new free school. I regret that UKIP is making this a political issue, particularly at this time when community relations are at a very sensitive point.”

The school, which will have 700 places for boys aged 11 to 18, has already opened temporarily in the former Falcon View Social Education Centre in Cotton Tree with 150 pupils. The new building is expected to open in September 2015.

Shabir Fazir from the Tauheedul Free Schools Trust said as a matter of policy he would not comment on anything political. “Our school is required to admit 50 per cent of our pupils on non-faith grounds – so children of any faith can get admission into the school.”

At the planning committee where the Trust received planning permission for its 700-place school, UKIP Cllr Paul Richardson, who represents Little Lever, said: “The fact that it is a single-gender school means thousands of boys would be educated in isolation from girls of their own culture and boys and girls of other cultures. This would be socially divisive. We are going in the wrong direction – away from social integration.”

The party’s branch chairman may claim that UKIP is “not anti-Islamic”, but that is certainly not the view of Bryn Morgan, fascist leader of the Stop the Astley Bridge Mosque Bolton campaign, who has been urging support for the UKIP candidate in a council by-election this week. 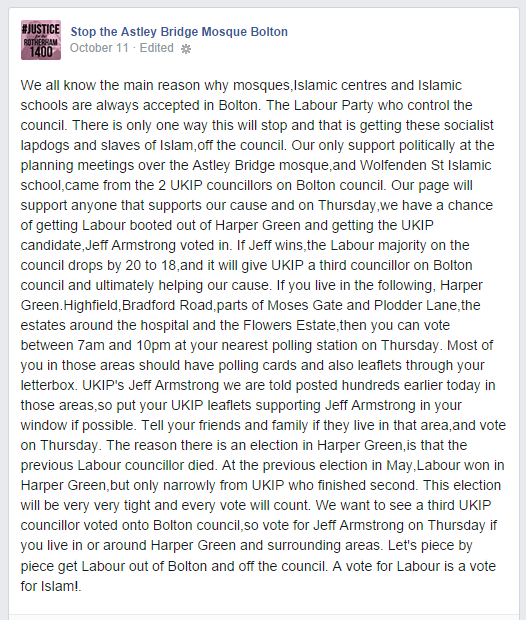 Morgan, who was the leading figure in the BNP’s Bolton branch, has just been expelled from the party. That is hardly surprising, given that he has openly sided with expelled former chairman Nick Griffin, using the Stop the Astley Mosque Facebook page to promote Griffin’s new far-right organisation, announced last week at a meeting in St Helens. The organisation, reportedly to be named Resistance, will be modeled on Génération Identitaire, notorious for its record of inciting anti-Muslim hatred in France.

If Bolton UKIP want to demonstrate that they really are “not anti-Islamic”, they could start by publicly repudiating Morgan’s support. 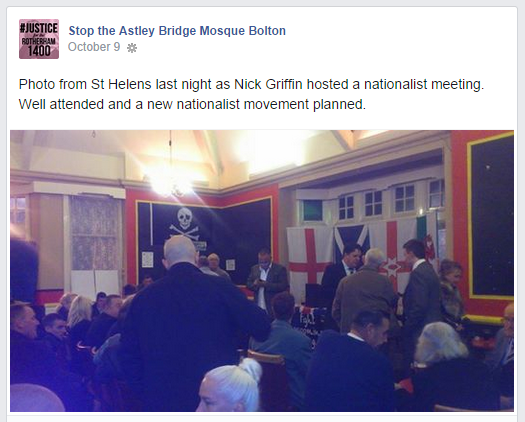