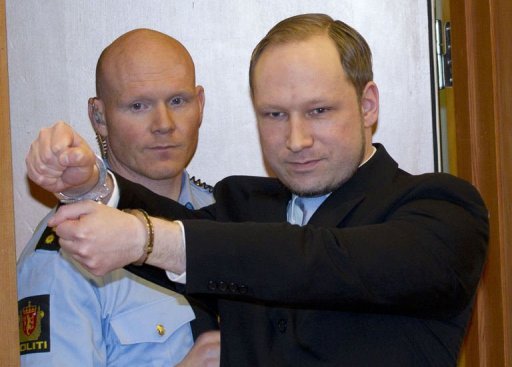 Anders Behring Breivik, who confessed to attacks which left 77 people dead and 242 injured in Norway, has been charged with terror acts. Defence lawyers went to his prison near the capital, Oslo, to present their client with the charges.

Prosecutors have indicated they consider Breivik mentally ill and will seek to have him committed to psychiatric care rather than jailed.

Breivik is expected to go on trial on 16 April. He has been charged under a paragraph in Norway’s anti-terror law that refers to violent acts intended to disrupt key government functions or spread fears in the population. “The defendant has committed highly serious crimes of a dimension we have no previous experience with in our society in modern times,” prosecutor Svein Holden told reporters in Oslo.

If convicted, Breivik faces a maximum penalty of 21 years in prison.

The prosecution said last week it was prepared to accept Breivik was criminally insane and therefore not responsible for his acts, and as such it might not call for a prison sentence. However, it reserved the right to alter that view if new elements emerged about his mental health by the end of the trial.

Breivik has said his attacks were atrocious but necessary for his campaign to defend Europe against a Muslim invasion.