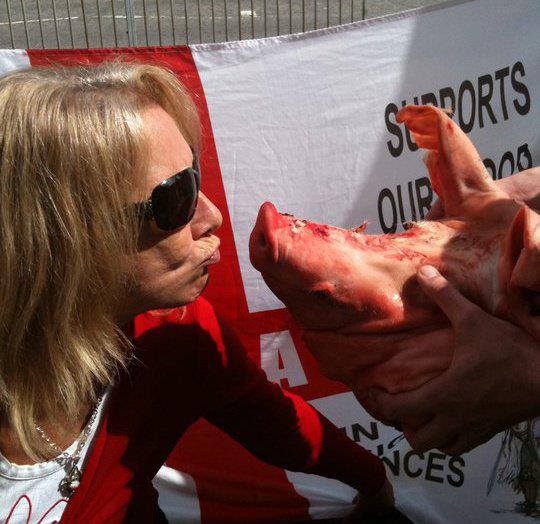 Police are looking into inflammatory comments – posted on an English Defence League web page – advocating an arson attack on a proposed Bristol mosque.

The posts, apparently left by non-members of the controversial political movement, suggest burning down the Islamic place of worship planned for former Jesters comedy club site on Cheltenham Road. Another comment on the EDL’s Bristol division Facebook page suggests that a pig’s head would stop the mosque being opened, as Muslims do not eat pork.

Avon and Somerset police spokesman Martin Dunscombe said: “We have been made aware of the comments in question and officers are looking into them.”

The comments could breach section 127 of the Communications Act 2003, which makes it an offence to send a menacing message by means of electronic communications. There is a potential six-month prison sentence on conviction.

The EDL has distanced itself from the comments, saying they were not made by genuine members.

Chelsea White, who administrates the Bristol Facebook page, said: “I have checked the names and none of them are members of Bristol division. Whereas we have admin control on our Facebook groups and pages, we have no control over what members of the public post on our sites.

“A lot of people claim to be EDL without ever having attended a meeting or demonstration. Comments like those you are referring to also upset real members, as it reflects on us.”

It is of course complete nonsense to claim that Bristol EDL have no control over what members of the public post on their Facebook page.

Because Chelsea White (pictured above) has admin control over the page, she would have had no difficulty deleting the inflammatory comments, had she chosen to do so. The fact is that the threats against the proposed mosque have been on the Bristol division’s page for well over a week, and indeed are still there now.

Anyone who follows the EDL’s online activities knows that this is no isolated case. The organisation’s Facebook pages are filled with calls to carry out arson attacks on mosques and desecrate the sites with dead pigs, with no action being taken by EDL admins to remove them. For recent examples from the EDL’s national Facebook page, see here.

Readers of Islamophobia Watch may remember Chelsea White. Last year she was appointed South West regional organiser of the now defunct far-right British Freedom party. As we noted at the time, White publicly expresses views that demolish the EDL’s claim that its opposition to Islam has nothing to do with racism.

To quote White: “WE LIVE IN A COUNTRY….OUR COUNTRY.. WHERE IF YOUR WHITE AND ENGLISH YOU DON’T COUNT FOR MUCH BECAUSE THE VOTE IS IN THE AREAS THEY HAVE FLOODED WITH IMMIGRANTS.”

Postscript:  As for the individuals who posted the inflammatory comments not being members of Bristol EDL, the reality is that the movement has no formal membership structure, so technically it has no members at all. The EDL’s identifiable support base consists of those who sign up to its Facebook pages.

Gerry Woody’s Facebook “likes” include both the national EDL and the Bristol division. David Croc Johnson is signed up to the Facebook pages of numerous EDL groups, including both the Bristol and Weston-super-Mare divisions. Andrew Smith’s “likes” include the South London EDL Millwall division, and among his Facebook friends is Mickey Bayliss, who organised the EDL demonstration in Bristol in July 2012.

So Chelsea White’s claim that they are not part of the EDL and are merely “members of the public” is disingenuous to say the least.

Postscript 2:  The EDL’s Bristol division has taken to Facebook and Twitter to repeat the false claim that the inflammatory comments were posted by “none members”, accompanied by the additional lie that the comments were made “on the Bristol post website not our website”.