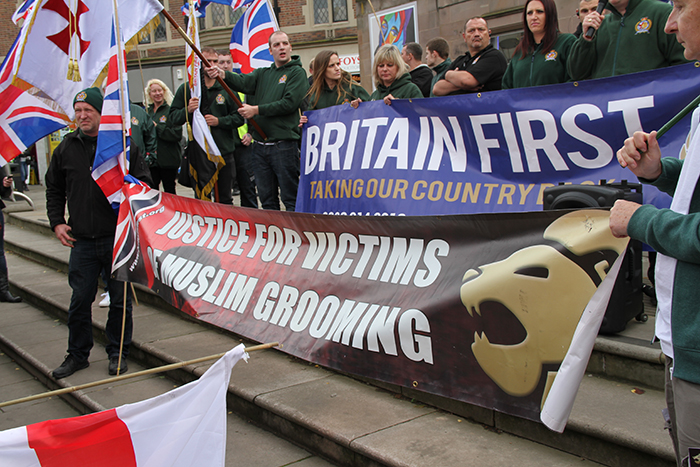 Hundreds of Britain First supporters have marched through the centre of Rotherham.

Two arrests were made during the march after several supporters and bystanders had strong exchanges of words along the route.

The demonstration was the group’s second visit to the town within a month following the publication of Professor Alexis Jay’s report into child sexual exploitation in Rotherham, which revealed 1,400 children had been abused by mainly Pakistani men over 16 years.

Police and council officials failed to take action because of sensitivities around the ethnicity of the offenders.

The Britain First supporters met at Westgate car park before the march to All Saint’s Square for speeches. Hundreds of police officers were on duty in the town to monitor the crowds.

Traders in the town once again reported a slump in business as the far right group passed through the town’s main shopping area.

The claim that “hundreds” of Britain First supporters marched through Rotherham appears to be a gross exaggeration. Hope Not Hate’s estimate was “about 100”, while South Yorkshire Police put the figure at “around 120”.

Nor does Independent Inquiry into Child Sexual Exploitation in Rotherham provide a basis for the blunt accusation that “police and council officials failed to take action because of sensitivities around the ethnicity of the offenders”.

Alexis Jay’s report states: “Within the Council, we found no evidence of children’s social care staff being influenced by concerns about the ethnic origins of suspected perpetrators when dealing with individual child protection cases, including CSE.”

Further: “All the senior officers we interviewed were asked whether ethnic considerations influenced their decision making. All were unequivocal that this did not happen…. Frontline staff did not report personal experience of attempts to influence their practice or decision making because of ethnic issues.”

With regard to the police, the criticism is not that they were hamstrung by concerns over the ethnicity of perpetrators of child sexual exploitation, but rather that: “At an operational level, the Police gave no priority to CSE, regarding many child victims with contempt and failing to act on their abuse as a crime.”

As for the video that accompanies the Star report, it’s like a party political broadcast for Britain First, providing a platform for deputy leader Jayda Fransen to spout BF propaganda unchallenged, and without any local opponents of the march being allowed to put a contrary view.

With irresponsible journalism like this, it’s hardly surprising if the far right’s attempts to stoke up anti-Muslim hatred are making an impact in Rotherham.