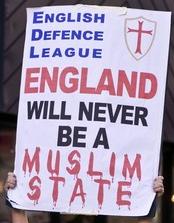 The head of the English Defence League, Tommy Robinson, will be named deputy leader of the British Freedom party this week after proposing that the group adopt virulent anti-Islamic policies as its central strategy.

Confirmation that Robinson is to be offered a political platform within the BFP is contained in internal documents revealing that he has forwarded a number of “potential policy suggestions” that suggest the party will widen its attacks on Muslims.

The document suggests the BFP with Robinson would “focus on non-Islamic population, not white/black population”, a move that critics describe as an attempt to antagonise relations between Muslims and other Britons. Other proposed areas of campaigning for the party, which will contest several seats in this week’s local elections, include calls for regulation of all mosques and religious schools and the banning of the burqa and niqab.

The unveiling of Robinson as deputy leader of the British Freedom Party will take place in Luton ahead of an EDL demo in the town, during which supporters will be banned from its centre by police, following previous disturbances.

Last week, a BFP member tweeted his support for Norwegian killer Anders Breivik, while an EDL member defended the 34-year-old, currently on trial in Oslo after confessing to the murder of 77 people last July, and said that if he had “singled out the muslim filth” he would be viewed as a hero.

Internal notes of a meeting held in a Luton hotel between senior EDL and BFP figures on 14 April, which have been seen by the Observer, reveal that participants believe the alliance is a development that “will change the direction of British politics”.

However Nick Lowles of campaign group Hope not Hate said: “Although this shows the new face of the far right, a move that further marginalises the BNP, their agenda is so hate-filled that it will remain a minority message.”

Robinson and the BFP have yet to comment, but the documents show that he backs a ban on the building of mosques and madrassas, an end to mass immigration, withdrawal from the EU, and promotion of “Christian values”.

Last week a report by Amnesty International warned of the rise of extremist political movements targeting Muslim practices in Europe, a development evidenced by the surprisingly strong showing of support for the French Front National, the far-right party led by Marine Le Pen, in France’s presidential election. It also said that European laws on what girls and women could wear on their heads were encouraging discrimination against Muslims.