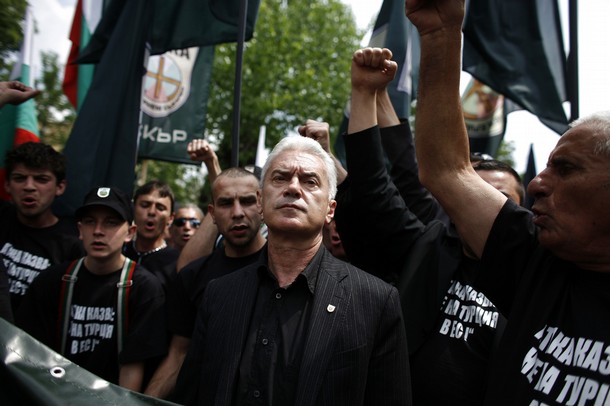 About 100 activists and supporters of the parties gathered across the building of the City Hall in downtown Sofia under the sounds of patriotic songs.

The municipal counselor from VMRO, Angel Dzhambazki, addressed the rally, saying the noise during the Friday Muslim prayer is challenging tolerance and public order.

Ataka leader, Volen Siderov, noted that there is a petition, launched as early as 2006, already having over 30,000 signatures against the loud noise. He appealed to the City Hall to adhere to the public order decree.

Ataka have also sent an open letter to the City Hall asking for a ban to use the space outside the mosque for religious rites.

“For centuries Sofia is a symbol of religious and social tolerance, and we must preserve this. We should avoid PR actions with the goal of gaining political dividends based on controversy. If there is a violation of public order, measures will be undertaken,” Mayor of Sofia, Yordanka Fandakova, stated.

Fandkova reminded that after receiving information about the noise last year, she ordered a probe, and the loudspeakers were turned down. “After that I have not gotten any new reports about the sound violating public order,” said the Mayor.

In May 2011, nationalist supporters shocked Bulgaria, as its rally protesting against the use of loudspeakers by the Banya Bashi mosque got out of hand and its activists assaulted praying Muslims in front of the mosque.

The Banya Bashi mosque in downtown Sofia is a part of the city’s unique “triangle of tolerance”, encompassing also the St Nedelya Church, and the Sofia Synagogue are located within metres of each other in the very centre of the city.

Recently, Bulgaria’s Deputy Chief Mufti, Murat Pingov, renewed calls for the construction of a second mosque in the capital.