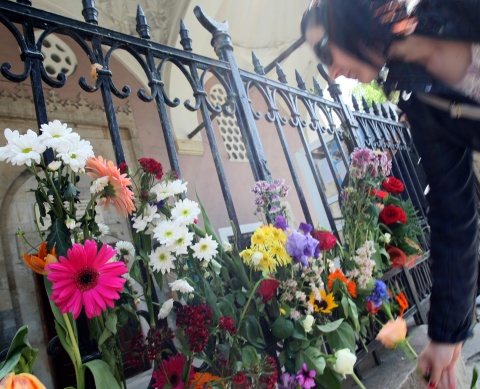 A number of Bulgarian citizens have come to the Banya Bashi mosque in downtown Sofia to lay flowers as a gesture of apology, ashamed of Friday’s incident in which the nationalist party Ataka assaulted praying Muslims.

The incident occurred as the far-right party led by its leader Volen Siderov rallied near the mosque to demand a ban of the use of loudspeakers but the rally quickly got out of hand.

The event entitled “A Flower for a Free Bulgaria” gathered 1,200 supporters on Facebook until Saturday afternoon, after it was announced Friday afternoon as a reaction to the brawl in downtown Sofia.

The organizers originally called for a gathering to lay flowers at the Banya Bashi mosque Saturday evening in order to demonstrate to the Muslims who were assaulted that there are “other people” in Bulgaria who condemn the acts of far-right extremism. However, many Bulgarian citizens have flocked to lay flowers during the entire day on Saturday, as well as Friday night.

Messages for tolerance, which is traditional for Bulgaria, prevail on the Facebook wall of the initiative, together with calls to find a solution to the problem with the loudspeakers of the Sofia mosque.