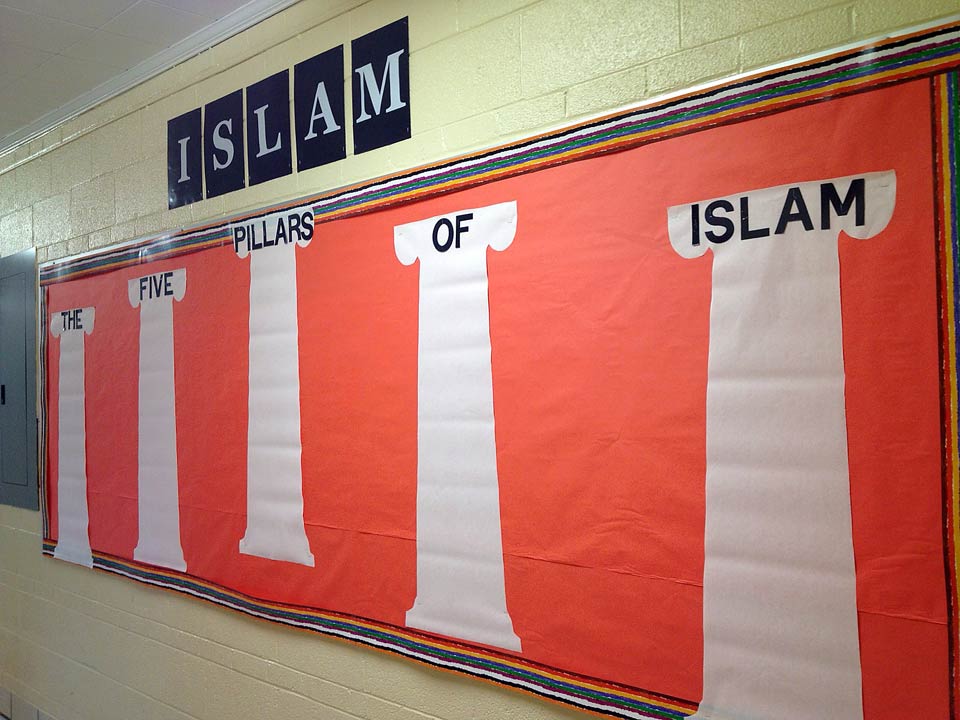 A bulletin board at a Wichita elementary school that illustrated the Five Pillars of Islam has been removed “because of the misunderstanding that has been promoted by … one photograph,” district officials said Monday.

The bulletin board at Minneha Core Knowledge Magnet Elementary was intended to aid students’ study of major religions of the world, district spokeswoman Susan Arensman said in an e-mail. It featured five white, construction-paper columns and the words, “The Five Pillars of Islam.”

A photograph of the bulletin board, reportedly taken on the first day of school Wednesday, was posted over the weekend on a Facebook page titled “Prepare to Take America Back.” It has since been shared on several conservative blogs.

“Students at Minneha Core Knowledge Elementary School in Wichata (sic) Kansas were met with this their first day of school,” a caption under the photo said. “This is a school that banned all forms of Christian prayer. … This can not stand.”

As of Monday, the photo had been shared more than 3,500 times.

The district issued a statement Monday responding to concerns about the bulletin board. “Minneha Core Knowledge Magnet students cover the five major religions of the world – Christianity, Judaism, Hinduism, Buddhism and Islam – as part of their Core Knowledge magnet curriculum,” the statement said. “The students study civilizations throughout time, throughout the world, and cover religion with a focus on the history and geography in the development of civilizations.

“The bulletin board that originally caused the concern does represent the 5 Pillars of Islam – in a historical context of their studies. There is also a painting of the Last Supper hanging in the school as part of the study of art and the Renaissance period. The students at Minneha have received these lessons for years as part of their Core Knowledge curriculum.”

The photo “of a bulletin board without context is misleading, and some have taken it out of context without having all the information,” the district said. “Because of the misunderstanding … the bulletin board has been taken down until the unit is taught later this fall.”

The bulletin board was in a hallway outside fourth-grade classrooms, Arensman said. The material is part of the fourth-grade history and geography curriculum at Minneha.

The Five Pillars are five basic acts in Islam, considered obligatory by believers. They are: the confession of faith, prayerful worship, fasting during the month of Ramadan, charitable giving, and a pilgrimage to Mecca at least once in a lifetime.

As part of the core knowledge curriculum, which is overseen by the national Core Knowledge Foundation, children are introduced in early grades to major world religions, beginning with a focus on geography and major symbols and figures.

“The purpose is not to explore the matters of theology, but to understand the place of religion and religious ideas in history,” the district statement said. “The Core Knowledge goal is to familiarize, not proselytize; to be descriptive, not prescriptive.”

Arensman added that Wichita public schools have not banned Christian prayer, as the online photograph alleges. “Students and staff have the right to engage in private prayer or religious activities as long as it’s not disruptive,” she said.

Dennis Hedke, a Republican member of the Kansas House of Representatives, states that he was “appalled” when he heard of the display. He is reported as saying that “the way the school teaches about Islam glosses over some of the more unsavory aspects of the religion, such as Jihad and the annihilation of Israel”. Hedke added: “If you’re going to talk about Islam and make it sound like it’s another one of those religions that needs to be understood and contemplated by mankind, there’s a serious misunderstanding.”