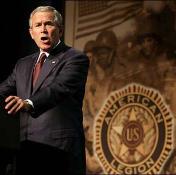 “President Bush has toned down his war rhetoric after Muslim-rights groups complained his description of the enemy as ‘Islamic fascists’ unfairly equates Islam with terrorism. In his speech to the American Legion Thursday, Bush backed away from the term, defining the enemy simply as ‘fascists’ and ‘totalitarians’.

“He said the war on terror was an ‘ideological struggle’ with terrorists who ‘kill those who stand in the way of their totalitarian ideology,’ but he did not identify the source of the ideology. His only reference to Islam during the speech was in noting that the Muslim terrorists are distorting the tenets of the religion. ‘Free societies are a threat to their twisted view of Islam,’ he said….

“While the White House declined to comment officially about the dropping of the term ‘Islamic fascists,’ a White House insider explained that the president is sensitive to concerns raised by Muslim leaders. ‘The president never meant to imply we’re at war with Islam, but some took it that way,’ the official said. ‘It’s not a climb-down as much as a recognition of the concerns of the Muslim community.’ …  Washington officials have been careful during the war on terror to distinguish between Islam and the terrorists so as not to offend Muslims. The distinction has rankled many conservatives who see little difference.”

Though it may have pissed off the neocons, it seems to me that Bush’s American Legion speech represented only a marginal shift in his rhetoric. True, he avoided using the precise phrase “Islamic fascists”, but the thrust of his argment was the same. He outlined the familiar claim that the US is not engaged in wars of imperialist conquest but rather in a global battle to defend freedom against Muslim totalitarians. According to Bush’s paranoid fantasy, groups as different as Hezbollah and al-Qaida form “a single movement – a worldwide network of radicals who use terror to kill those who stand in the way of their totalitarian ideology”. This is, Bush opined, “the decisive ideological struggle of the 21st century”.