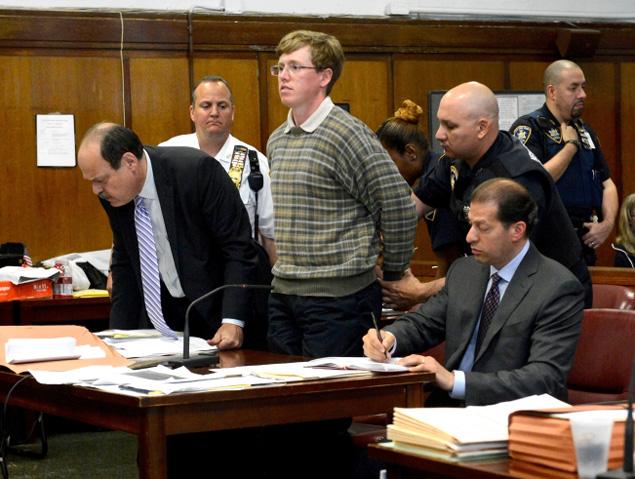 Crazed film student Michael Enright pleaded guilty Tuesday to slicing the throat of a Muslim cab driver in a hate-fueled 2010 attack, with the promise of a 9½-year sentence.

A stone-faced Enright, 24, pleaded guilty to attempted murder and assault as hate crimes for the shocking attack on Ahmed Sharif, a Bangladeshi father of four, who picked up his would-be killer at E. 24th and Second Ave. on the evening of Aug. 24, 2010.

The boozed-up former School of Visual Arts student insulted Sharif’s religion, then lunged into the front seat with a knife and started hacking away at the driver’s neck. He also cut the cabbie’s face, arms and hands, prosecutors said.

“I used a knife and cut him … in the throat,” a stoic Enright said as he entered his plea. “Was it your intention to cause his death by doing that?” asked Manhattan Supreme Court Justice Richard Carruthers. “Yes,” he admitted, in front of at least two-dozen of the slasher’s family members and supporters.

Prosecutor James Zaleta recommended an 18-year prison sentence, but the judge said nearly a decade behind bars plus five years of post-release supervision was fair. “I do believe the sentence is appropriate and just,” Carruthers said. Zaleta had argued Enright’s “egregious, hateful, actions warrant a high prison sentence.”

Enright was handcuffed and hauled off to a holding cell after the proceeding. His sentencing is set for June 25.

He had faced up to 25 years in prison on the top count.