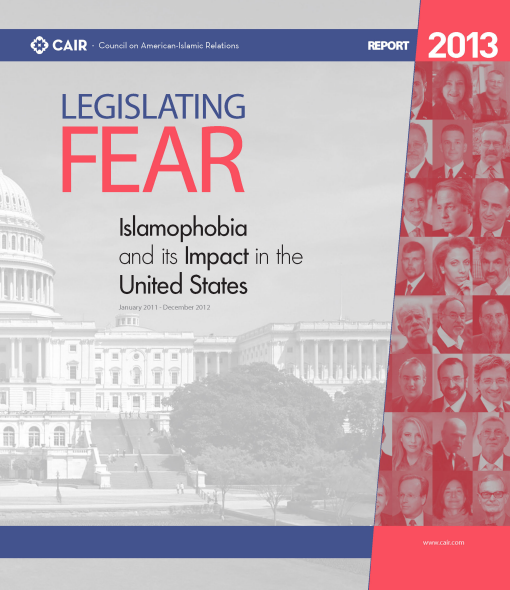 The nation’s largest Muslim civil rights and advocacy organization today released a report, “Legislating Fear: Islamophobia and its Impact in the United States,” which reveals that anti-Islam groups received more than $119 million in funding between 2008 and 2011.

The new report by the Washington-based Council on American-Islamic Relations (CAIR) also identifies 37 organizations dedicated to promoting anti-Islam prejudice in America. CAIR’s second report on the subject more fully identifies the “Islamophobia network” in the United States and exposes its funding.

“This report sheds light on the groups promoting Islamophobia in our society and reveals to the reader the impact those groups have on our nation’s discourse about Islam, pluralism and the future of the protections enshrined in the U.S. Constitution,” said Corey Saylor, who directs CAIR’s department to monitor and combat Islamophobia.

In 2011, after significant pressure from CAIR and other organizations that included crucial reporting by Wired.com’s Spencer Ackerman, federal authorities initiated steps to remove biased and inaccurate material about Islam from law enforcement training materials. Studies and a lack of consequences for most candidates for public office who engage in anti-Muslim rhetoric reveal an unfortunate societal tolerance for prejudicial speech directed at Muslim.

CAIR names individuals, institutions and groups that were at the center of promoting Islamophobia in America during the period covered by the report. The “worst” list includes:

CAIR also names individuals, institutions and groups that deserve recognition for their outstanding contributions to pushing back against Islamophobia in 2011 and 2012. The “best” list includes:

This is CAIR’s second report on Islamophobia in the United States. The first, “Same Hate, New Target,” was published in 2010 and argued that anti-Islam sentiment is a manifestation of problems minorities have faced in the U.S. throughout its history.

See also “Islamophobia and its impact in the United States”, CAIR, 19 September 2013