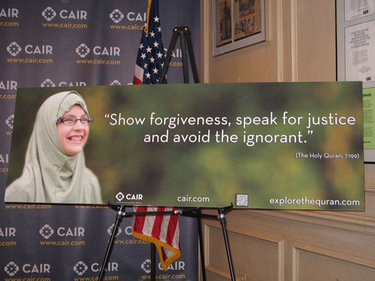 The Council on American-Islamic Relations (CAIR) today unveiled an advertising campaign designed to counter anti-Muslim “savage” advertisements sponsored by a designated hate group that are now on display in Washington, D.C. , metro stations.

CAIR’s counter ads feature a verse from the Quran stating: “Show forgiveness, speak for justice and avoid the ignorant.” (The Holy Quran, 7:199) The CAIR 16-foot banner ads, which are scheduled to go up next week and stay up for a month in stations featuring the hate ads (Glenmont, Georgia Avenue/Petworth and U Street), also direct metro riders to the organization’s “Explore the Quran” initiative.

“We hope to expand this anti-hate campaign in the nation’s capital and throughout the nation,” said CAIR National Executive Director Nihad Awad. “We need the community’s help to challenge the growing propaganda campaign of anti-Muslim hate in our society with positive messages of what Islam is and who we really are.”

He added that other groups are placing ads designed to counter Pamela Geller’s hate campaign and welcomed their clear rejection of hate.

Sojourners CEO Jim Wallis stated: “When Jesus said, ‘Love your neighbor as yourself’ he didn’t add stipulations. He didn’t offer an extra addendum or an added qualifier. It meant love your neighbor; even if they don’t look like you, sound like you, or believe like you do. We as Christians need to treat others how we want to be treated – with love and respect.”

Awad noted that Geller, the sponsor of the hate ads, was recently the subject of a CAIR “Islamophobe profile” documenting the individuals and organizations involved in spreading anti-Muslim bias in the United States.

CAIR’s profile of Geller states in part: “Geller’s organization Stop the Islamization of America (SIOA) is designated as a hate group by the Southern Poverty Law Center (SPLC), which also named Geller as a member of the ‘anti-Muslim inner circle.'”

CAIR is appealing for donations to help defray the cost of their anti-hate advertisements. Go to: https://www.cair.com/support/