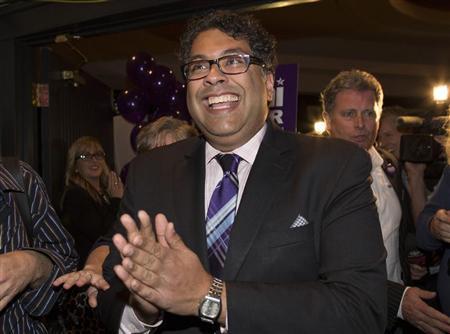 Calgary Mayor Naheed Nenshi, who three years ago became the first Muslim elected to the office in a major North American city, easily won re-election on Monday after a first term dominated by a stellar performance during devastating floods.

Nenshi, 41-year-old Harvard graduate and former McKinsey & Co consultant, won a national profile for his response to the floods that swamped large parts of the city of 1.1 million in Canada’s costliest natural disaster.

He won 74 percent of the vote against eight opponents, including a former provincial cabinet minister, a marijuana advocate and an anti-abortion activist.

Nenshi, a left-leaning leader in a province known for its conservative bent, was a ubiquitous presence during the floods that shuttered downtown Calgary for nearly a week in June.

He led round-the-clock media briefings, warned about safety and posted a relentless string of Twitter updates, spawning the Twitter tag #nap4nenshi and pictures of “Supernenshi,” with his chubby face Photoshopped onto a picture of Superman.

“Everybody asks me the question about how much sleep I have had, which means I must look terrible,” Nenshi said at the time.

Rival candidate Larry Heather, who described himself as the “Christian Choice” for mayor, had warned voters that they faced the wrath of God if they elected Nenshi. Heather received 0.7% of the vote.