San Mateo, CA — In the US Senate primary in California on June 5th, where 23 candidates vie to challenge Senator Dianne Feinstein in November, conservative candidates were recorded on video verbally attacking teachers, Muslims, and minority groups to excite their base at GOP and Tea Party venues.

The video was recorded at a “Get to Know Your Candidates” event hosted by the San Mateo GOP at the American Legion Hall here. Dr. David Levitt, the candidate who recorded the event, reports unmasked homophobia, Islamophobia, and racism in the Republicans’ speeches.

In the video Republican candidate Rabbi Shifren cries, “… I AM an Islamophobe, and everything we need to know about Islam, we learned on 9-11! I believe in peace and justice for everybody – but that’s not why they’re here…. We’re getting sucker-punched because we as white – yes I said it! – as white, Christian Americans are being taught that somehow WE are to blame for all the problems.”

In October 2010 Nachum Shifren visited the UK to express his solidarity with the English Defence League, joining them for a demonstration in support of Israel and against “Islamic fascism” at which he was the main speaker. Fired up by Shifren’s Islamophobic rhetoric – he described Muslims as “dogs” who were trying to “take over our countries” – three EDL members attacked an Islamic literature stall and were later convicted of public order offences, with one of them receiving a seven-day prison sentence and a five-year CRASBO. 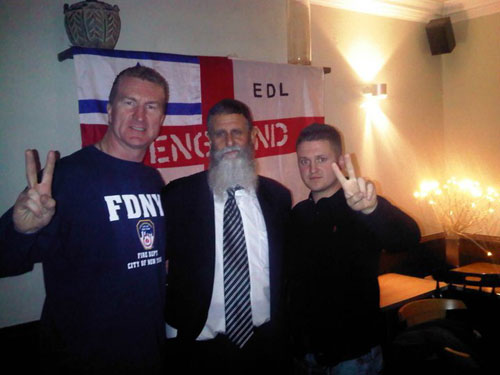