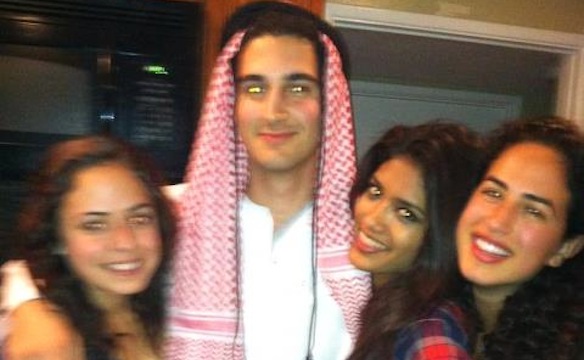 Leaders of Muslim student groups at the University of California, San Diego, are upset after a photo of a student senator dressed in Muslim garb circulated on the Internet.

Student Senator Ashton Cohen took a photograph at a campus party dressed in a robe and head-covering, with three women whom a caption identified as his “three wives,” according to the UCSD Guardian. Now, leaders of the Muslim Student Union and Arab Student Union, and Students for Justice in Palestine are admonishing him for “Islamophobia.”

“I was offended and disgusted that someone would think that’s OK to wear to a party,” Students for Justice in Palestine and Arab Student Union President Noor El-Annan told the Guardian.

But Cohen said that the photo was not racist. He has not taken it off Facebook. “I was surprised that they went through these sorts of extremes,” he told the Guardian.

According to the Guardian, El-Annan did not call for Cohen’s resignation, though he met with university administrators yesterday. Cohen was an opponent of a resolution calling for his school’s divestment from Israel this year, which did not pass the student Senate.

It’s not hard to imagine what the reaction would be if a student turned up at a party in a costume intended to caricature the dress and culture of the Jewish community. In fact you don’t have to imagine it. Back in 2008 members of the Oxford university rugby club caused understandable outrage when they held a party at which participants dressed as Orthodox Jews carrying bags of money.