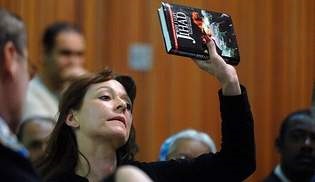 One woman was forced to leave early in the two-hour program after she accused guest speaker Tarek Mourad of lying, yelling that Islam’s holy book teaches Muslims to kill Jews and Christians and that Muslims are trying to take over the Western world.

Another was nearly arrested by Stockton Police Chief Wayne Hose, who said he came to the talk on his day off to learn more about Islam. The woman, who would only give her name as Barbara, handed out photocopied pages from a book critical of Islam and on numerous occasions interrupted Mourad’s talk to read passages about Islam that conflicted with her Christian views.

Hose finally called a police officer to the library in case the interruptions continued and after “Barbara” asked if he was Christian. “Don’t talk to me,” Hose told her, rejecting her offer of anti-Muslim reading material. “I can’t hear what he (Mourad) has to say.”

Mourad, an engineer from Santa Clara, was invited to the Chavez Library after making a similar presentation in Tracy. He explained the six basic beliefs, including a belief in God and a day of judgment, to the five “pillars” of Islam, such as praying five times a day and making a pilgrimage to Mecca, Saudi Arabia, the home of Islam.

His presentation, which happened to be on the Muslim New Year, turned to near chaos during the question-and-answer session. Hose and librarian Mary Jo Gohlke, who organizes adult programs at the library, each nearly pulled “Barbara” from the audience of nearly 70 people after she wouldn’t stop reading aloud. Barbara recommended the audience read “Islam and Terrorists,” issued by a company that publishes Christian-themed books and written by a convert from Islam to Christianity.

“Just go back and listen to Pat Robertson on TV,” yelled one man, who walked out in a huff.

You’ll note that the book the anti-Muslim heckler is brandishing is Walid Shoebat’s Why I Left Jihad.