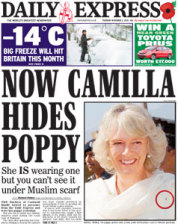 “Camilla meanwhile has being coming under fire from the Daily Express for one for not wearing a poppy. Yesterday they declared ‘Islamic Camilla dumps poppy’, because it was chaffing her ‘Muslim scarf’.

“Today, they are moaning that ‘she is wearing one but you can’t see it under Muslim scarf’. As you can see from the picture, she is wearing the traditional Pakistani daputta. This is a Muslim scarf how? The Express would do well to remember before stoking this Islamophobic and racist nonsense that tens of thousands of soldiers from the sub-continent laid down their lives in WWI for their British colonial masters, and if they’re sincere about commemorating the war veterans, then let’s focus on that.”