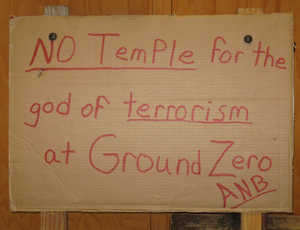 Vandalism to a Madera Islamic center and signs found on the property are being investigated as a hate crime, the Madera County Sheriff’s Department said today.

A brick was thrown at the building Friday and three signs were found at Masjid Madera, 16634 Road 26, during two other incidences since Aug. 18, said Erica Stuart, Sheriff’s Department spokeswoman. Two of the signs were found on the center’s property Tuesday afternoon.

The signs read “No Temple for the God of terrorism at Ground Zero. ANB,” “Wake up America, the Enemy is here. ANB” and “American Nationalist Brotherhood.”