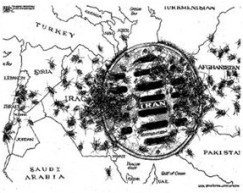 “Here is a clue why, despite billions spent by Washington on its global public relations campaign, the image of ‘ugly Americans’ still persists in many part of the world, particularly the Muslim world.

“Just look at the vicious demonization of Iran and everything Iranian in Hollywood, the US media and, of course, the political rhetoric of American politicians.

“A distasteful odor of hate ideology, repelling rational thought, is discernible everywhere, with Iran-bashing in vogue and evincing the darker side of US political culture, ie, the imperialist, xenophobic, intolerant and repressive sentiment of politicians and media pundits toward Iran.

“… other than several Iran-bashing motion pictures by the Hollywood ‘culture industry’, perhaps the most flagrant, and ugliest, manifestation of this phenomenon in US politics and media has appeared in that vital compartment of opinion-making we call political cartoons.

“Notwithstanding the recent controversies swirling about European cartoons denigrating Islam’s Prophet, or a German cartoon showing the Iranian soccer team dressed as suicide bombers, the right-wing American cartoonists have been making their own contribution – by depicting Iranians variously as dogs, beasts and, in the case of one published last week, by Pulitzer-winning cartoonist Michael Ramirez, as cockroaches.”

Petition against the “cockroaches” cartoon here