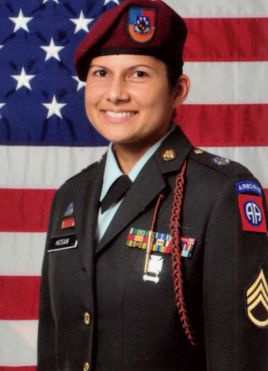 Sgt. 1st Class Naida Hosan is not a Muslim – she’s a Catholic. But her name sounded Islamic to fellow U.S. soldiers in Iraq, and they would taunt her, calling her “Sgt. Hussein” and asking what God she prayed to.

So before deploying to Afghanistan last year for her second war tour, she legally changed her name – to Nadia Christian Nova.

This did not solve her problems. Instead, matters escalated. Nova complained to her superiors about constant anti-Muslim slurs and jokes. She says they responded with a series of reprisals intended to drive her out of the Army, leading her to consider suicide.

“My complaints fell on deaf ears every time,” said Nova, 41, a member of the Army’s 82nd Airborne Division based at Fort Bragg, N.C. “Any time I would say something about it I was treated like I didn’t know what I was talking about or that I’m an idiot or that I was a Muslim sympathizer. It was just a very lonely feeling.”

Determined to remain in the service for at least eight years, until she is eligible for retirement, Nova recently re-enlisted. But she agreed to tell her story to The Associated Press because “I don’t want this to happen to anyone else if I can help it. It’s a horrible to feel like people are against you when you are supposed to be on the same team.”

Determined to remain in the service for at least eight years, until she is eligible for retirement, Nova recently re-enlisted. But she agreed to tell her story to The Associated Press because “I don’t want this to happen to anyone else if I can help it. It’s a horrible to feel like people are against you when you are supposed to be on the same team.”

Fort Bragg spokeswoman Sheri L. Crowe said the Army would not comment on the case, and referred questions to the U.S. Department of Justice. The U.S. Attorney’s Office for the Eastern District of North Carolina, assigned to defend the Army, also declined comment.

But her account is supported by an affidavit filed by an old friend, Sharon Deborah Sheetz, who said that Nova had confided in her about the harassment she had suffered, telling Sheetz that she was so unhappy that she no longer wanted to live.

A Farsi linguist who works in military intelligence, Nova’s multicultural background exemplifies the kind of soldier Army recruiters prize — U.S. citizens with ethnic ties to a part of the world many Americans can’t find on a map.

Nova’s father, Roy Hosein, was born into a Muslim family on the Caribbean island of Trinidad, where his parents had emigrated from India. He converted to Christianity after meeting Nova’s mother, a Catholic from the Philippines, and became a U.S. citizen shortly after his daughter was born in New York. He changed the spelling of his family name to Hosan in the hope his children would avoid discrimination.

“He Americanized it,” his daughter explained. “He got Hosan from Hosanna. He kept hearing it in church.”

She reported for basic training two months after the terrorist attacks on Sept. 11, 2001.

“Before 9-11, my last name never raised an eyebrow,” she said. “But after 9-11, I felt compelled to tell people I am a Christian and felt I had to prove I was loyal to the United States.”

Her first deployment was to Iraq in 2005. She said other soldiers, including her supervisors, mocked her family name and made crude jokes.

“I was called Sgt. Hussein, as in Saddam Hussein,” she said. “Even when I would correct them on the pronunciation of my name, I was still called Sgt. Hussein. I was asked what God I pray to. And there were a lot of references to hajjis, used as a derogatory term.”

Hajiis, in fact, are Muslims who have made the pilgrimage to the Saudi Arabian birthplace of the prophet Muhammad. But Nova said she regularly heard U.S. troops use the word as racist slang for enemy, terrorist or suicide bomber.

“My uncle is a hajji, because he made the pilgrimage to Mecca in 2005,” Nova said. “I would stand up for what I thought was right and say, ‘Not all terrorists are Muslims and not all Muslims are terrorists.’ That just opened the door for more harassment.”

Mikey Weinstein, a former U.S. Air Force officer who founded Military Religious Freedom Foundation, said Nova’s experience is not uncommon. Military personnel who are Muslim or perceived to be of Middle Eastern descent are often targets for discrimination, he said.

“When a Muslim soldier, sailor or airman stands up for themselves, they are the subject of vicious reprisal and retribution,” said Weinstein, who is Jewish. “What (Sgt. Nova) has gone through is horrible, but it is typical.”

In 2007, while serving in Harrogate, England, Nova said co-worker told her and others a racist joke about Muslims. When she objected, Nova said, a supervisor warned her to stop making trouble. Instead, she filed a formal complaint with the Army’s Equal Opportunity Branch, the program charged with ensuring the military provides an environment “free of unlawful discrimination and offensive behavior.”

Within days, Nova said she was removed from her job and ordered to take a “command directed” mental health evaluation.

“In writing, the referral said my values were not in line with mission,” she said. “They considered me a ‘Muslim sympathizer,’ that I was too loyal to Muslims.”

Rather than address her complaint, Nova said, the Army transferred her to the 82nd Airborne at Fort Bragg. Though she hoped to make a fresh start with her new unit, word of her complaint followed her to North Carolina.

That treatment worsened after a November 2009 shooting rampage at Fort Hood in Texas. Maj. Nidal Hasan, a Muslim, is charged with killing 13 people. His name sounded a lot like hers.

Nova changed her name shortly before deploying to Afghanistan last year. She arrived just after worn copies of the Quran were found to have been burned with trash from a U.S.-run prison outside the capital of Kabul, a widely reported incident that triggered violent protests.

The Army responded by initiating a new training program on the proper handling and disposal of Islamic materials. But Nova said she discovered that her unit trashed and burned documents collected through intelligence gathering that contained what could be considered sacred writings.

Nova conferred with an on-base military chaplain, and suggested designating a special box for Islamic materials so they could be disposed of in a more appropriate manner.

“When I brought this up, I was told ‘Sgt. Nova, you can’t bring your religion to work …,'” she recalled. “I changed my name, but that didn’t change other people’s ignorance.”

After just two months in Afghanistan, she said her commanders removed her from her job and ordered her back to Fort Bragg.

With the help of a Fayetteville lawyer, Mark Waple, she filed a formal complaint with the Army’s Inspector General in October seeking a voluntary discharge due to being subjected to “adverse treatment and negative, prejudicial remarks … concerning the Muslim faith.”

Nova said she grew so depressed that she considered suicide. She checked herself into an on-base hospital for treatment, staying for about a week before returning to duty.

After learning of her IG complaint and hospitalization, Nova’s commanders at Fort Bragg responded by filing paperwork to involuntarily end her military career and bar her from reenlistment for “ineffective leadership.”

Nova’s Army performance review from a few months earlier, a copy of which she provided to AP, shows her as meeting expectations in all categories, with her senior commander rating her potential for promotion and increased responsibility as “superior.”

The forced discharge could have imperiled Nova’s ability to get a civilian job, denied her Veterans Affairs medical care and educational benefits.

After exhausting her administrative options for fighting her case, Waple helped Nova file a complaint in federal court alleging discriminatory treatment and asking a judge to prevent her discharge.

Rather than fight the case in court, the Army retreated. Shortly before a key hearing before the judge, Waple says he got a call from Army lawyers informing him that the disciplinary action against Nova was “completely off the table.” She, in turn, agreed to drop the lawsuit.

Nova re-enlisted in the Army on April 8. She recently married, and is preparing to ship out next month to attend a senior leadership course and then report to a new assignment in Germany.

“I want to put all this behind me. I want to move on to my next duty assignment …,” said Nova. “My beliefs aren’t any different from what the Army states as its beliefs and values. I would like to be treated fairly.”