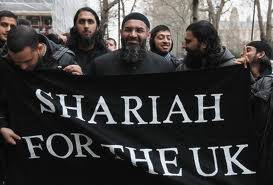 A radical Muslim who led the banned group al-Muhajiroun is to be handed his own programme on Channel 4.

Anjem Choudary, who was also involved with the banned group Islam4UK which planned a protest march through Wootton Bassett, will have free reign to give his views during an edition of the channel’s daily opinion slot, known as 4thought.tv.

Choudary, who has described the 9/11 bombers “magnificent martyrs”, will say in his programme to be broadcast on Dec 5 that British Muslims are “persecuted”.

Channel 4 has already broadcast a film by another radical Muslim, Abu Nusaybah, who supported Choudary’s plan for an Islamist march through Wootton Bassett, the scene of tributes to fallen British soldiers. In it, Nusaybah called for sharia law to be introduced in Britain.

This isn’t the first time that Channel 4 has used Muslims in a cynical attempt to provoke outrage. Four years ago they had the bright idea of persuading a veiled Muslim woman to deliver an “alternative Chistmas message”, to be broadcast in direct opposition to the Queen’s annual Christmas Day message. This stunt played right into the hands of anti-Muslim bigots who want to portray Islam as a hostile and alien ideology. But what did Channel 4 programmers care about that? They’d succeeded in generating controversy and gaining cheap publicity, and assisting the political right in whipping up Islamophobia was a price worth paying. The same irresponsible motives would appear to lie behind the decision to give airtime to unrepresentative nutters like Anjem Choudary and Abu Nusaybah.