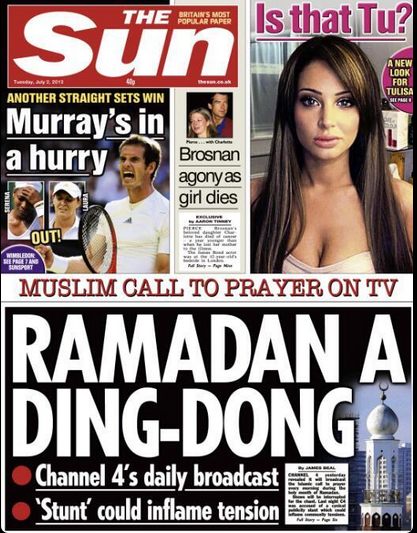 Channel’s 4 broadcast of a Muslim call to prayer during the holy month of Ramadan was the programme that brought the broadcaster the most complaints last year.

The broadcast received 2,011 complaints about its 4Ramadan season, with 1,658 specifically about the broadcast of the daily call to prayer.

Writing in the broadcaster’s annual report, the head of factual programmes for Channel 4, Ralph Lee, said: “The level of Islamophobia we encountered with the 4Ramadan season was unexpected, though much of it came from communities that were either very polarised or very undiverse.”

Lee said he had personally received hundreds of emails complaining about the broadcast after he defended it in an article for the Radio Times, in which he said it would “act as a nationwide Tannoy system” and a provocation to viewers “in the very real sense of the word”.

Channel 4 received a total of 16,835 complaints in 2013. The second most complained about show was Crazy About One Direction, a documentary about the boyband’s most devoted fans, which attracted 1,056 complaints.