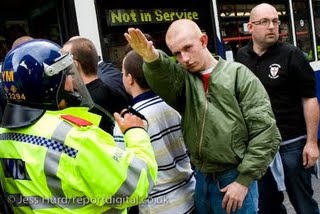 The rise of the English Defence League, whose protests against Islamism have sparked violent city centre clashes, has been chaotic but rapid.

Three months ago, no one had heard of the EDL. But the organisation has risen to prominence in a spate of civil unrest in which far-right activists, football hooligans and known racists have fought running battles with Asian youths. The leadership insists they are not racist and just want to “peacefully protest against militant Islam”.

Yet at EDL events, skinheads have raised Nazi salutes and other EDL supporters have chanted racist slogans such as “I hate Pakis more than you”. One protest in Luton in May ended with scores of people attacking Asian businesses, smashing cars and threatening passersby.

Insiders have talked of plans to enlist football fans to march for the cause on the basis that “you need an army for a war”.