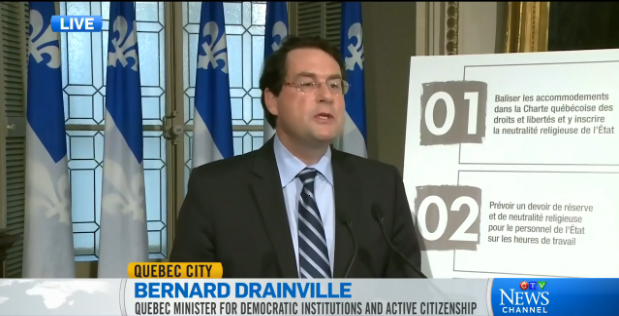 Public employees would not be allowed to wear overt religious symbols at work under the proposed charter of Quebec values, released by the Parti Québécois today.

The minister in charge of the charter, Bernard Drainville, announced at the national assembly that, if adopted by the legislature, the wearing of kippas, turbans, burkas, hijabs and “large” crosses would be banned for civil servants while they are on the job. “If the state is neutral, those working for the state should be equally neutral in their image,” said Drainville.

The plan would apply to judges, police, prosecutors, public daycare workers, teachers, school employees, hospital workers and municipal personnel. Drainville said some institutions and public organizations might be able to opt out of the ban for a five-year period. However, he said, daycare workers, elementary school teachers and early-care providers would not be eligible for the opt-out.

The charter would also require that anyone who received or administers services from the state would have to uncover their face. “People have to be identifiable, mainly for security purposes,” said Drainville.

Drainville said that the charter would include five proposals:

Drainville said elected members of the national assembly will not be subject to the regulations.

Though no timeline has been announced, the bill is expected to be tabled sometime in the coming months.