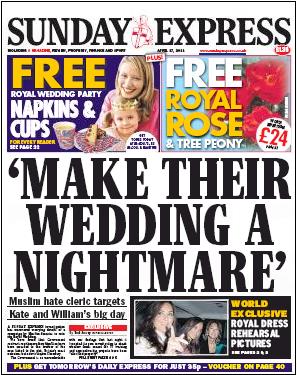 Muslims Against the Crusades have, entirely predictably, called off their threatened protest against the royal wedding tomorrow.

This is, of course, the usual method adopted by Anjem Choudary and his sorry little gang of provocateurs.

In October 2009 Choudary said he would organise a “March for Shari’ah” in London and then, having milked this for all the publicity he could – with the Daily Express reporting it under the front-page headline “Now Muslims demand: Give us full sharia law” – he announced that the demonstration would not be going ahead after all.

In January last year Choudary claimed that he intended to hold a demonstration in Wootton Bassett, with his followers carrying 500 coffins to symbolise the thousands of Muslims killed in Iraq and Afghanistan. Again he used the threat to generate the maximum media coverage for himself and his minuscule group and then called it off.

Earlier this year Choudary declared that he would hold a rally outside the White House to advocate sharia law in the US and then, having provoked the expected outraged coverage by the right-wing media, he called that off too.

So anyone with half a brain could work out that the threat of a MAC protest against the royal wedding was just another publicity stunt by Choudary which would not actually take place. Yet the 17 April issue of the Sunday Express carried a front page report on Muslims Against the Crusades with the banner headline “Make their wedding a nightmare” and devoted fully three pages to reporting on Choudary’s tiny and unrepresentative band of supporters.

You do feel that Richard Desmond, Rupert Murdoch and other right-wing media owners should consider putting Choudary on a retainer in recognition of the service he provides in assisting their campaign to demonise the Muslim community.