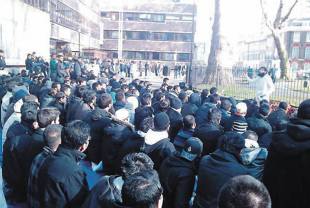 Hundreds of Muslim students and staff have turned Northampton Square into a makeshift mosque after university bosses padlocked their prayer room.

For the past week, Muslims at City University in Finsbury have endured the wind, rain and snow to pray three times a day on the pavement.

And at Friday lunchtime, up to 350 students and staff turned out for the weekly congregational prayer. Shafiq Mundiya, 26, a technical support officer, said: “We need a place to pray and we have been praying outside to tell people that we are upset and that we want our prayer room back. The prayer room was constantly being used by staff and students. The fact that the university closed it is quite devastating.”

For 10-plus years, the university’s Muslims have performed several of their five daily prayers in the basement of the Gloucester Building in Whiskin Street, Finsbury. Students say it was used by about 100 people a day, and up to 450 on Friday lunchtimes. But City University decided it was not safe to keep it open after four Muslim students were stabbed in St John Street by racist thugs in November. The 23-year-old undergraduate said: “We have had no problems with that gang since. They have even approached one of us, apologised and said it was a misunderstanding.”

Last Monday, the Gloucester Building prayer room was padlocked and Muslim students were directed to a new multi-faith room nearer the centre of the university. But campaigners say they cannot use a room that is also for the worship of other deities and that it only has space for 40 men and 40 women.