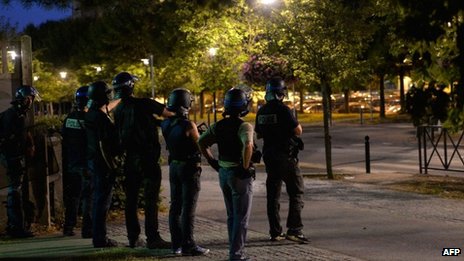 About 250 people clashed with police firing tear gas in a Paris suburb on Friday, in apparent protest over enforcement of France’s ban on Islamic face veils. Four police officers were injured and six people were arrested, while a 14-year-old boy suffered a serious eye injury from a projectile, police said.

Youtube videos showed demonstrators hurling projectiles at a police station in Trappes, a gritty suburb southwest of Paris, while a number of bins were set on fire. Around a dozen vans carrying riot police were deployed to the area, while a helicopter was dispatched to carry out surveillance of the town. Order was restored at around 3am when the crowd began to disperse.

The clashes were apparently sparked by the arrest on Thursday of a man accused of assaulting a police officer after his wife was stopped for wearing a full-face veil – illegal under French law. “Her husband reacted in a hostile fashion, insulting and hitting the policeman,” Jean-Marc Galland, a senior official for Yvelines département (region), where Trappes is located, told Reuters. “The man was placed in custody for that reason.”

“On Friday, there were demands for clarification from people in the town who did not understand the arrest,” he added. Mr Lesclous later told reporters that the man had in fact attempted to strangle one of the police officers during the altercation.

However, The Collective Against Islamophobia in France (CCIF) published a statement on its website on Saturday, claiming to be from the wife of the arrested man, in which she accused the police of being abusive and using unnecessary force.

She said that a police officer grabbed her by the veil, spoke to her aggressively and violently pushed her mother. “I turned and I saw my husband being held on the ground by two policemen who were putting him in handcuffs,” the statement, by a woman named Hajar, said. “Once in the police car, they yelled at us like we were animals.”

The CCIF said the actions of the police were a sign of the “racism and Islamophobia” that are now “clearly institutionalised and legitimised” in France.