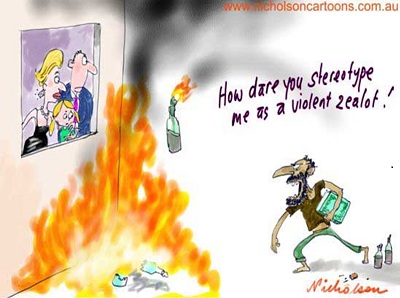 Slide from a presentation titled ‘Sharia and the Constitution’

A class taught by the military to officers at the Joint Forces Staff College in Norfolk, Virginia, came under fire when a report on Wired’s Danger Room blog last week exposed it for teaching soldiers to engage in a “total war” on Islam and taking a war on Islam “to the civilian population wherever necessary.”

The full set of course materials, hundreds of documents and slide shows obtained by ThinkProgress, reveal just how deep Islamophobia ran through the military instruction. The material contained dozens of citations to the work of some of America’s best known anti-Muslim bigots.

Not all of the material in the course, however, was anti-Muslim. Materials from reputable sources such as the Brookings Institution and RAND corporation also appeared among the readings, and only some of the presenters to the class used blatantly Islamophobic material.

But the “Islamophobia network,” discussed in the Center for American Progress’s report, “Fear, Inc.” played a prominent role in many of the 266 documents acquired by ThinkProgress.

The Islamophobes named are Robert Spencer, David Yerushalmi and Daniel Pipes, along with Frank Gaffney’s Center for Security Policy. Right-wing anti-Muslim publications like the Washington Times and the National Review are also cited numerous times in the documents.