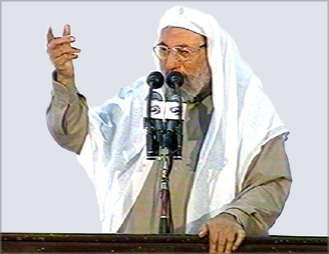 “A Muslim cleric who has defended suicide bombings in Israel and Iraq is to be allowed into Britain next month for an international conference. Yusuf al-Qaradawi, 79, who has a visa to come to Britain but is banned from entering the United States, has been asked to attend the conference in Manchester.

“The invitation will be seen as the first test of the Government’s promise after the London bombings to clamp down on hardline Islamic preachers and other extremist clerics.

“Charles Clarke, the Home Secretary, is expected to let Dr Qaradawi enter Britain despite having the power to ban him on the grounds that his presence is not ‘conducive to the public good’ and is a threat to public order.”

And good for Charles Clarke (it’s not often I say that). At least he can recognise a mainstream Muslim scholar who fights against the extremism that produced 7/7, which is more than can be said for the Murdoch press.