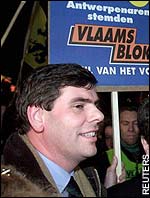 A multicultural youth association and an anti-racist movement in Belgium have lodged a complaint against the leader of an extreme-right party for his recent comments made in an interview with a Jewish American magazine.

“Kif Kif” and “MRAX” (Movement against Racism, Anti-Semitism and Xenophobia) requested the Antwerp prosecutor to press with charges against Filip Dewinter, head of the Flanders-based Vlaams Belang (or Flemish interest) party for “inciting hatred”. They also demanded that his parliamentary immunity be lifted and that public subsidies to the extreme-right party be cancelled.

In an interview with the New York-based “Jewish Week”, published last month, Dewinter admitted that his party has an “Islamophobia”. Asked why Jews should vote for a “xenophobic” party, Dewinter replied: “Xenophobia is not the word I would use. If it absolutely must be a phobia, let it be islamphobia.”

“Yes, we are afraid of Islam. The Islamisation of Europe is a frightening thing. If this process continues, the Jews will be the first victims. Europe will become as dangerous for them as Egypt or Algeria”, he added.

“So, I return your question. Should Jews vote for a party that wants to stop the spread of Islam in Europe?” he asked the journalist. Dewinter added : “In our view, Judaism and Islam are absolute not two of the same kind. On the contrary, they are foes.”

“This interview is not only an unfortunate attempt to seduct the Jewish electorate in Antwerp but also an incitement to hatred,” MRAX director Didier de Laveleye, told EJP. “This is attempt to mount the Jewish and Muslim communities one against each other,” he added.

He mentioned that the two associations were preparing a letter to the “Jewish Week”, co-signed by the heads of the Belgian Jewish and Muslim communities, warning the newspaper against giving a “platform” to the extreme-right leader.

“Dewinter presents himself again as the defender of the Jewish community towards Islamist radicalism but nobody is duped, it’s full propaganda and his move is merely an electoral calculation,” Myriam Zomersztajn, director of the Jewish secular community centre in Brussels, told the newspaper “Le Soir.”

In the same interview Dewinter also distanced himself from some anti-Semitic figures within his party and called himself “the number one friend of Israel.”