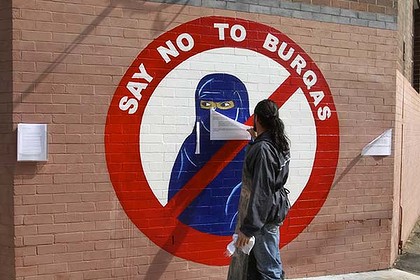 It has become a lightning rod in the public debate about the right of Muslim women to wear the burqa, attracting protests, the censure of a mayor and messages of support from talkback radio. But now the Newtown mural of a woman in a full-face Muslim covering with a strike symbol over her face and the words ”Say No to the Burqa” is the subject of an anti-discrimination complaint.

Cigdem Aydemir, 27, a Muslim, artist and high-school art teacher, said she felt “completely offended and insulted” when she saw the mural pop up in her neighbourhood. The work of a local artist, Sergio Redegalli, the piece adorns a wall of his studio facing the street and the busy rail line.

“My sister-in-law wears a burqa … my mother wears a veil,” she said. ”I wore a veil for 10 years of my life. I think everyone has the right to wear whatever they want on their body and that kind of diversity needs to be protected.”

Aydemir went to the police and then the council to try to make the complaint, but as the mural was painted on private property neither could intervene. She lodged her concerns with the Anti-Discrimination Board, who this week notified Redegalli. Aydemir said: “It’s Islamophobic; it’s feeding the racist and sexist attitudes we have in our society.”