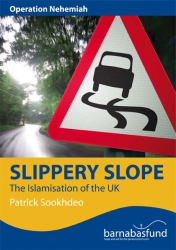 The Charity Commission has received a complaint about a charity that is campaigning against the “Islamisation of the UK”.

The commission said concerns had been raised about the Barnabas Fund, which is selling a booklet it has produced called Slippery Slope: the Islamisation of the UK.

The Barnabas Fund offers financial support to projects around the world that help Christians suffering oppression and persecution “as a consequence of their faith”.

The booklet claims that DVDs featuring radical preachers are “widely disseminated” in mosques and says that on one such DVD a speaker argues that “if a girl refuses to wear the hijab, she should be hit”. It also claims that radical Muslim preachers say “women are created with deficient intellect”.

A commission spokeswoman said: “Concerns have been raised with us regarding the Barnabas Fund after recent media coverage of a booklet produced by the charity. We are currently considering the issues raised to determine what, if any, regulatory interest there is for the commission.”

According to the Charity Commission register, the Barnabas Fund reported an income of £10.2m for the year to 31 August 2010.