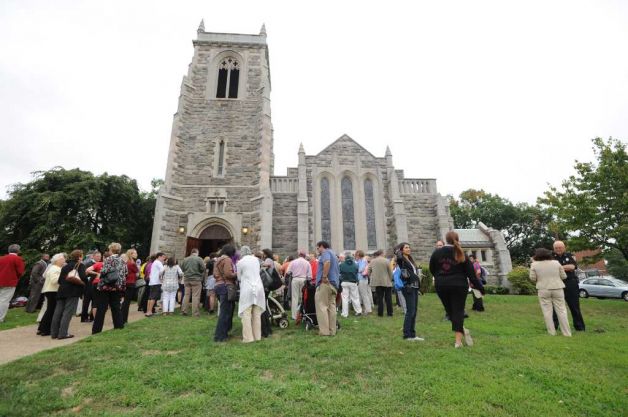 Stamford, Connecticut — Dozens of people from all religious backgrounds gathered outside the First Congregational Church of Stamford Tuesday night to express support for the local Muslim community.

“I don’t like, as a religious person, as a person of faith, seeing a religion condemned,” said the event’s organizer, Rev. Kate Heichler, president of the InterFaith Council of Southwestern Connecticut. “In the America I grew up in, when someone’s getting picked on you go stand with them.”

Heichler planned the vigil in reaction to recent instances of “Muslim bashing,” which she said are occurring on national and local levels. The controversy over “Park51,” an Islamic Community Center slated for construction two blocks from ground zero, and an Aug. 6 demonstration by members of the Christian group Operation Save America outside a Bridgeport mosque were two incidents that inspired Tuesday’s vigil, Heichler said.

Mongi Dhaouadi, a representative from the Council on American Islamic Relations, drove down from Hartford to attend the event. He said he had been inside the Bridgeport mosque when Operation Save America members yelled that Muslims should give up the Koran for a month. The remark, made on the first night of the holy month of Ramadan, was “very hurtful,” Dhaouadi said.

“We need to use this occasion to turn things around,” he said. “Let us walk away tonight with a commitment. We have so much in common. There are so many problems out there and we can face them all together.”

Religious leaders from the Christian, Jewish and Islamic faiths read prayers in English, Hebrew and Arabic in front of the crowd. Naveed Khan, a representative from the Stamford Islamic Center, said that acts of hatred and bigotry risk isolating Muslims from their own communities.

“Events such as this today help bridge the gap of our misunderstood religion,” Khan said. “We ask for your support in any times of darkness we may have. And we will, in turn, be in lockstep with our community.”

Several elected officials attended the vigil, including state Rep. William Tong, D-Stamford, and state Rep. Gary Holder-Winfield, D-New Haven, who drove down to Stamford from New Haven for the demonstration.