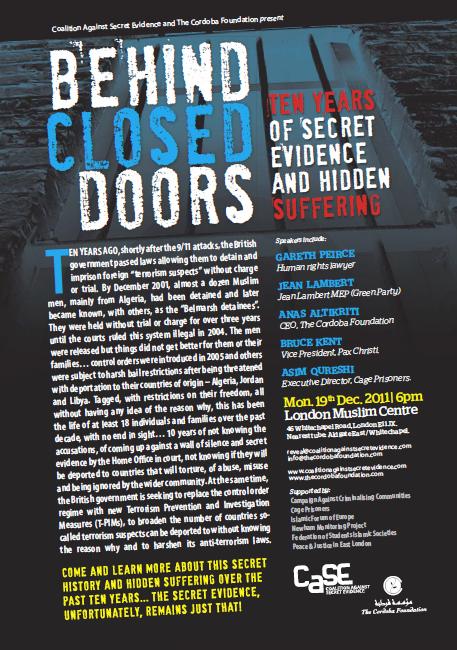 Ten years ago, shortly after the 9/11 attacks, the British government passed laws allowing them to detain and imprison foreign “terrorism suspects” without charge or trial. By December 2001, almost a dozen Muslim men, mainly from Algeria, had been detained and later became known, with others, as the “Belmarsh detainees”. They were held without trial or charge for over three years until the courts ruled this system illegal in 2004.

The men were released but things did not get better for them or their families… control orders were introduced in 2005 and others were subject to harsh bail restrictions after being threatened with deportation to their countries of origin – Algeria, Jordan and Libya. Tagged, with restrictions on their freedom, all without having any idea of the reason why, this has been the life of at least 18 individuals and families over the past decade, with no end in sight… 10 years of not knowing the accusations, of coming up against a wall of silence and secret evidence by the Home Office in court, not knowing if they will be deported to countries that will torture, of abuse, misuse and being ignored by the wider community.

At the same time, the British government is seeking to replace the control order regime with new Terrorism Prevention and Investigation Measures (T-PIMs), to broaden the number of countries so-called terrorism suspects can be deported to without knowing the reason why and to harshen its anti-terrorism laws.