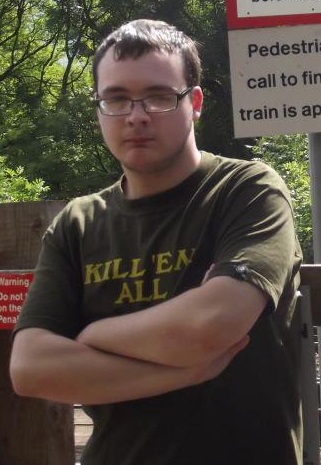 A teenager described as a “would-be terrorist” armed himself with guns and explosives to plan a repeat of the Columbine massacre on his former school, a court has heard.

Michael Piggin was found with petrol bombs, air rifles, pistols and armour at his home which he planned to use for a terror attack on staff and pupils at his former high school in Loughborough, Leicestershire, it is alleged.

The teenager, who was 17 when he was arrested but can now be named after turning 18, also identified his college, Loughborough Mosque, a local cinema, Loughborough University and the town’s council offices as potential targets, the Old Bailey heard.

A Che Guevara notebook emblazoned with Nazi swastikas and English Defence League (EDL) mottos was found when his home was searched by police in February last year, the jury was told. Opening the case, prosecutor Max Hill QC said the notebook included drawings showing how Piggin would arm himself and discussed tactics to carry out “The New Columbine”. Eric Harris and Dylan Klebold murdered 12 students and one teacher at Columbine High School in Colorado in 1999 before both committing suicide in one of America’s worst mass shootings.

A “hit list” of people’s name was written in the notebook as well as the Joker’s phrase “Why so serious?” from the Batman film, the Dark Knight, Mr Hill said. The Mujahideen Poisons Handbook was also found in Piggin’s home along with video and dictaphone recordings in which he discussed an attack, the jury heard.

Piggin, who has Asperger’s syndrome, denies a charge of possessing items for the purpose, preparation and instigation of an act of terrorism. They allegedly include partially assembled petrol and pipe bombs, partially constructed improvised explosive devices (IEDs), a stab proof vest and gas mask, air rifles, pistols, ammunition and a note book containing information about the planning and construction of explosive devices found at his home.

Mr Hill said: “For an average young man in an average house in Loughborough or any other town…that list is startling. Michael Piggin described properly, as we say, as a would-be terrorist but happily stopped by the police before he could get any further.” Mr Hill told the court Piggin held “extreme views” which he was “serious” about putting into action.

Piggin, dressed in a black Arctic Monkeys T-shirt and wearing glasses, sat in the dock with an intermediary. He also denies possessing a document or record containing information likely to be useful for a person committing or preparing an act of terrorism.

Update:  The Daily Mail reports that Piggin wrote “EDL no surrender British and proud” on the cover of his notebook. It adds: “A self-proclaimed member of the English Defence League, he wrote rambling notes about the need for ‘Britain and Europe to rise up and fight’ against Islam and warned ‘when order fails, violence prevails’.”

The Guardian reports: “On the back of his notebook, Piggin had scribbled ‘Fuck Islam – born in England, live in England, die in England’, and inside he wrote that he was a member of the EDL in opposition to the ‘Islamic invasion of Europe’.”

According to BBC News: “The prosecutor said Mr Piggin claimed to be a member of an EDL branch and wrote in a letter found at his home that there were ‘too many Muslims’ who wanted to ‘take over Europe and put Sharia law in place’.”