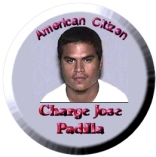 The Supreme Court rejected on Monday a request by Jose Padilla, a U.S. citizen held for three years as a suspected enemy combatant, for an immediate decision on his detention instead of waiting for a federal appeals court to rule. His attorneys asked the justices to decide whether President Bush has the power to seize U.S. citizens in civilian settings on American soil and subject them to indefinite military detention without criminal charges or a trial.