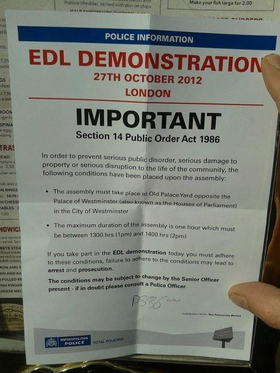 The leader of Croydon Council has called for a planned rally by right-wing extremists to be banned.

The English Volunteer Force (EVF) plans to protest outside the headquarters of the UK Border Agency (UKBA), in Wellesley Road, on July 27. The EVF, which claims to fight “the Islamification of Great Britain”, has said “all patriots are welcome” and has admitted it is likely to spark counter-protests from anti-fascists.

The move has angered many, with council leader Mike Fisher calling for the rally to be banned, stating: “We do not need this additional tension in Croydon.”

Originally it was reported members of the EVF were planning a march from Lunar House to the Croydon Mosque in London Road, Thornton Heath, but the group’s leader Jason Lock said the idea had been dropped in favour of a demonstration.

He said the organisation was planning a peaceful protest against the UKBA, which it claims is letting too many immigrants into the country “under the net.” “We are proud of the fact that we have had zero arrests at other demonstrations we have attended and our members are under strict instructions to ensure that continues,” he said.

Mr Lock claimed the EVF has no connections with the English Defence League (EDL), which has been involved in violent demonstrations since the murder of soldier Lee Rigby in Woolwich. He said the EVF has a membership of about 100 and that at least that number would turn up for the demonstration.

But Cllr Fisher said that following the killing of Mr Rigby, tension was high. He said: “It goes against the grain for me to call for a ban but this is such a sensitive time; it’s not appropriate for a demonstration to take place.” Mr Fisher described the demonstration, close to the August 8 two-year riot anniversary, as “deliberately provocative.”

The EVF has “no connections with the English Defence League” only in the sense that it is a breakaway from the EDL with even more extreme politics. It is led by a far-right activist named Chris Renton (“John Sheridan”), who played a leading role in the EDL during its early days and was also a member of the British National Party.

Mike Fisher will no doubt be told by the police that neither they nor the home secretary have the power to ban a static demonstration, which is what the EVF are proposing. However, if a static demonstration can be expected to cause “serious disruption to the life of the community” or if “the purpose of the persons organising it is the intimidation of others” (and the EVF protest qualifies on both counts) then the police do have the power under Section 14 of the Public Order Act to place conditions on the demonstration, notably by giving instructions to the organisers as to “the place at which the assembly may be … held”.

When the EDL attempted to hold a demonstration in the centre of Walthamstow last September the police imposed a Section 14 ban (see picture), and forced the EDL to hold their protest miles away in Westminster. The police can easily impose a similar ban on the EVF and order them to hold their protest well away from the centre of Croydon, where they will be unable to intimidate, and disrupt the life of, the local community.