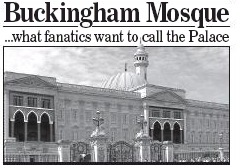 “As we approach Sat 31st October and British Muslim groups (Muslims4UK, ISB) prepare to counter the ridiculous ‘March for Shari’ah’ demonstration called by the Islam4UK fringe group, what groups do you suppose the Daily Express is busy promoting?

“No prizes for guessing of course, the DE’s obsession with Anjem Choudary and his al-Muhajiroun (or Islam4UK as they are now known) ilk is well known to bemused British Muslims.

“The paper today (image above) grants the fringe group yet another page spread, this in addition to the coverage given to Islam4UK on the 15th and 16th of this month. And yet you’ll be hard pressed to find any coverage of the counter-demonstrations in the newspaper’s pages, this despite the paper’s editorial plea for the ‘moderate Muslim majority’ to speak out.”